Marketing Strategy of Ray Ban analyses the brand with the marketing mix framework which covers the 4Ps (Product, Price, Place, Promotion). There are several marketing strategies like product innovation, pricing approach, promotion planning etc. These business strategies, based on Ray Ban marketing mix, help the brand succeed in the market.

Ray Ban marketing strategy helps the brand/company to position itself competitively in the market and achieve its business goals & objectives.

The product strategy and mix in Ray Ban marketing strategy can be explained as follows:

Ray Ban is a popular global brand which offers sunglasses and has a strong popularity all over the world. Ray Ban follows the customer need approach in designing the framework of their sunglasses which makes it way more attractive for customers. The products portfolio in its marketing mix are sunglasses (Aviator, Wayfarer, Clubmaster, round, Justin, Erika), Optics (The Clubmaster RB5154, The Timeless RB5228, The New Wayfarer RB5184, The Round RB2180V, For Her RB5255, Erika RB7046), Lenses (Lens category – classic, gradient, special, polarized), Lens Ranges (Green lenses G15, Brown Lenses B15, Mirror, Legends). Ray Ban has also an approach to build up the sunglasses on the demands of users with the special features like protection through UV rays. Ray Ban continuously keep tracking the demands and need of the customers and from the long time it has been successful in keep changing its products with the fashion and also been able to fit its products according to different culture all over the world. Ray Ban products manufacturing is mainly done in the 6 manufacturing plants situated in Italy, China, Brazil, India and United states. 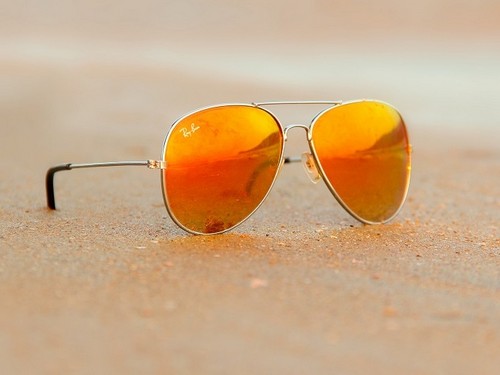 Ray Ban maintains its product quality so it charges a little higher than its competitors.

It uses its brand image to figure out the price of its products along with the customer demands and needs. Ray Ban generally don’t alter the product price in the different markets and focus on the consistent price maintenance all over the market. Some discount schemes are used according to cultural festivals or in the winter season otherwise generally Ray Ban follows the same price strategy everywhere. Ray Ban might be charging a little high but make sure there is no compromise in the quality of product.

Following is the distribution strategy in the Ray Ban marketing mix:

Ray Ban is a worldwide product which can be found out in most countries of the world. It follows the simple distributive approach in which there are distributors and retailers. It maintains a very sharp eye on the inventory shipped. Ray Ban has opened various exclusive stores in the prime cities of different countries for both sunglasses and optics. Other than the exclusive stores Ray Ban are generally found in big retail stores and shopping malls as they are costlier product and carry a society status with them.

Ray Ban has a holistic and complete marketing strategy as a part of its marketing mix promotion strategy. Ray Ban showcases its ads through print media and hoardings. Ray Ban also follows digital marketing where it launches various videos, advertisement on the social media sites and channels like YouTube to increase the visibility of products. This help them to a large extend as their target customers are mostly of young age who aggressively uses internet and social media sites. Through its websites also Ray Ban promotes its products by clearly in detail telling about each and every products. It also follows the traditional methods like TV advertisement, magazines, outlets etc. Ray Ban has also been uplifted by the sponsorship method being a part of movies, exhibitions and contests also increases the exposure of products. Ray Ban also comes up with discount and promotional policies to retain loyal customers and keep them engaged. Hence, this completes the Ray Ban marketing mix.

Ray Ban is an American company which is manufacturing only sunglasses and eyeglasses from 1937 which started with the creation of anti-glare glasses for the US army. Ray Ban gain popularity in 1980’s with the launch of product in movies which was diminished by its competitor Oakley in 1990’s which made the owner to sell the Ray Ban to an Italian company in 1999. To improve the brand image in the early 200’s Ray Ban focused on their quality products. They removed the low quality products from stores and distribution till 2004 and replenished it with the new high standard quality products. Ray Ban continued with its sunglasses as the core product for next 10 years and in 2014 it came up with optical glasses which turned out to be a little more profitable for Ray Ban as they were costlier and more in demand. It turned out that optical glasses starts generating 30% of the total revenue by 2015. While making up its products Ray Ban focuses mainly on innovation and styles according to different culture which make its products to be way more attractive.

Ray Ban currently hold around 5% market share in the eye glass market and it is the largest manufacturer of sunglasses in the world. Major competitors of Ray Ban are Oakley, Costa Del Mar etc.