Marketing Strategy of Hasbro analyses the brand with the marketing mix framework which covers the 4Ps (Product, Price, Place, Promotion). There are several marketing strategies like product innovation, pricing approach, promotion planning etc. These business strategies, based on Hasbro marketing mix, help the brand succeed in the market.

Hasbro marketing strategy helps the brand/company to position itself competitively in the market and achieve its business goals & objectives.

The product strategy and mix in Hasbro marketing strategy can be explained as follows:

Hasbro is a leading brand in the world of toys and games. The various products in its marketing mix portfolio are action figures (battling or collectibles), arts and crafts, books and comics, electronic toys, party supplies, outdoor sports supplies, creative kit plays, vehicles for children, card and board games etc. Hasbro products are categorised such as to target children of all age groups, as well as teens. Board games offering a family recreation package, is popular among all age groups.Some popular products had been: Star wars, Beyblade, Monopoly, Gi-Joe figurines. Hasbro studios is another recent venture of Hasbro, which has helped the company endorse its own products, through TV. Quality and Safety is one most important feature of Hasbro products. Also, Hasbro works hard for minimising environmental loss by using natural resources and reusable materials for product packaging. The brand focuses very much on uniqueness targeting current trends to design the toys. The products are mostly licensed by particular TV shows or movies. With Hasbro’s image of uniqueness, it has gained rights for many popular figures. More than toys Hasbro believes in creating entertaining play experiences though storytelling games, digital innovations, immersive experiences, etc. 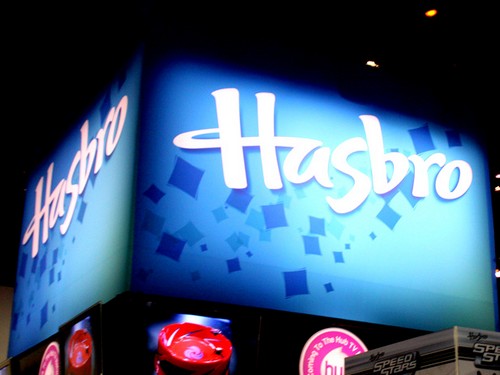 Following is the distribution strategy in the Hasbro marketing mix:

Hasbro operates in price range of 10$ to 100$+ hence, making sure to target most of the kids. The price and how entertaining the toy is, are the two factors that triggers the need of the end-consumers (Kids in the case) into the purchase decision by its customers (The parents). For lesser price Hasbro uses efficiency of operations. They employ efficiency in their operations so that they are able to provide cheaper products. Hasbro has chosen to position themselves as an innovator in the toys and games industry establishing a differentiation business model venturing into new markets always. Hence differentiation pricing strategy in its marketing mix is its main strategy. Earlier Hasbro had been the market leader in terms of its innovative ideas: being the first brand to launch Doctor kits, Action figures and life-games like Monopoly. Hence, with Mattel as market leader, Hasbro is a close competitor and follows the strategy of differentiation to price its product instead of cost leadership, focusing mainly on quality and uniqueness of the product to fix the price.

Hasbro’s self-owned factories are only two, while other products are manufactured by 3rd party vendors. The distribution is either through retailers or direct stores. The toys are purchased, once the need is triggered and parents feel justified with cost. With children’s attitude of favouring a particular toy, the product will sell itself if it is unique and advertised attractively. Once the decision had been made, product can be bought from any nearest store. For this, Hasbro has advanced its presence both online and offline. Flexible differentiation is one major point of differentiation with Hasbro. They products in the shelves are placed according to the current trends. For e.g. When frozen became a hit, the toy stores were filled more with Frozen toys rather than any other product. ‘Milk-run’ strategy is followed by Hasbro. First it uses information from various factors then trucks are loaded accordingly for minimizing the travel cost, with nearest manufacturer and retail location. This helps in minimizing costs. Hasbro’s dual follows distribution model with wholesale purchase or direct retail purchase. Retailing include kids section of the malls and stores like Toys ‘R’ Us. Online presence is also very effectively utilised. Hasbro has expanded in countries like Russia, Turkey Latin America and Europe, with its new product lines. Greece, Hungary and Mexico are also newly ventured markets. Successful venture in international market was due to its focus on market specific toys as well as better distribution channel and increased globalization.

Hasbro uses all media types to ensure a complete and comprehensive marketing strategy in its marketing mix. The ads are meant for kids hence, catchphrases and entertainment plays a significant role, along with simplicity. The slogan "Boy Oh Boy! It's A Hasbro Toy!" became a popular hit in advertisements. Promotion strategies include current happenings and popular themes amongst children around the world It collaborates with channels and movies for movie and TV tie-in products. For eg. Jurassic park, Barney, Discovery communications. Always venturing into new deals, Hasbro also gained popularity when Marvel comics and Starwars surfaced up. As, when such movies and shows gain popularity then sales of these toys automatically surges up. Hence, promotional activities are also tied up and part of such deals. If the child does not find the toys as interesting, cognitive dissonance may occur, that will negatively affect the sales. Hence, over selling the product during promotion is strictly avoided. The celebrities who endorse the products are favorite kids’ stars or the cartoon characters loved by the kids. Hasbro takes helps of television shows to get their product noticed e.g. recently Hasbro’s Dungeons and Dragons had been popularly advertised on the Big Bang Theory. Hasbro also engage in marketing with television commercials specially on kid’s channels as Disney or Nickelodean. These commercial are specially for the toys that are not exposed through movies or TV shows. Thus, Promotional strategy of Hasbro is targeted not only towards children but movie fans and adults with affection for any particular character. Hence this completes the Hasbro marketing mix.

Hasbro, Inc. an abbreviation of the original name, Hassenfeld Brothers is an American toy and board game company. It is the second largest toymaker in the world, Mattel being the first. Hasbro grew mostly through acquisitions and mergers, Parker brothers and Kenner to name a few. Mattel’s market has dropped over last years, while Hasbro’s has been growing, on account of their continuous innovation as well as mergers with many companies. Hasbro’s ‘board games’ can be defined as the cow of BCG matrix, which earn them profits. ‘Star-wars’ products are the huge success and with growing popularity they fit in the star box of the matrix. Upcoming products like ‘Disney’s little pony’ has potential growth although with low market share as of now.

Although some new ventures have failed also like ‘furby’. The main threats to toy industry are: economic downturns (as these are not need based products, in case of downside economy, the market will also go down), harsh competition, low barriers to entry, and international affairs, that can affect their international markets.