Marketing Strategy of Jaguar analyses the brand with the marketing mix framework which covers the 4Ps (Product, Price, Place, Promotion). There are several marketing strategies like product innovation, pricing approach, promotion planning etc. These business strategies, based on Jaguar marketing mix, help the brand succeed in the market.

Jaguar marketing strategy helps the brand/company to position itself competitively in the market and achieve its business goals & objectives.

The product strategy and mix in Jaguar marketing strategy can be explained as follows:

Jaguar is a premium luxury car brand, which is now a part of Tata Motors. Being a car manufacturer for more than nine decades, Jaguar has constantly changed its models over time. The first model was 2 ½ liter saloon, succeeded by 3 ½ liter saloon. Then the company introduced Mark series of vehicles. The engines of these cars were manufactured by Standard Motor Company. Along with regular driven models, Jaguar had a first breakthrough with the launch of record breaking engine design in XK120 sports car in October 1948. In 1992 Jaguar had the fastest production car in the world XJ220. XJ220 achieved the maximum speed of 217 mph (349 km/h). Over the years after 1992 Jaguar models sported their famous chrome plated leaping Jaguar, which used to be the part of radiator cap earlier. Jaguar mainly focuses on research and development, which helps them to develop world class innovation as part of their marketing mix product strategy. They aim at making sleek, sturdy cars using aluminum technology which helps to build lighter and more agile cars like the XE and the XF models. They are into the development of prospects of technologies of predictive gesture and voice control activation, laser referencing which will help to warn the drivers of any obstacles unseen by the driver and semi-autonomous driving systems to eliminate driving errors and improve road safety. 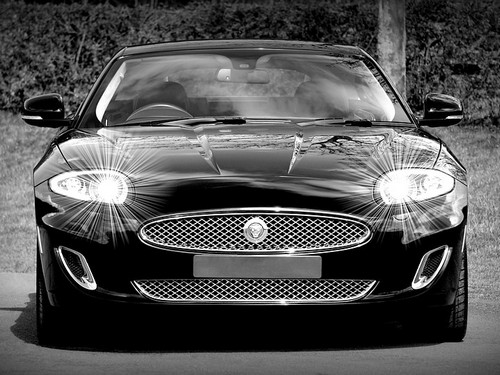 Jaguar being the luxury car manufacturer does not aim the masses for its products.

Premium pricing strategy in its marketing mix is the backbone of the brand. The prices are supreme for all its range of models. The model XF costs approximately 30000 GBP, while XK costs around 60000 GBP. These prices increase as per customers’ requirements. In India the start price is around Rs 49 lakhs, and goes upto Rs 2 crores. Compared to its competitors BMW, Mercedes and Audi; Jaguar is expensive and they take pride in being able to provide high performance, luxury and innovation in every vehicle they deliver. They provide best in class warranty coverage which is unlike other competitors’ coverage. They have the 5 year/ 60000 miles coverage whichever comes first, along with complimentary, roadside assistance and telematics coverage. The resale value of Jaguar is decent but not as much as compared to its German competitors.

Following is the distribution strategy in the Jaguar marketing mix:

Jaguar replaced the traditional supply chain strategy with a win-win value chain approach, where all the partners, suppliers, distributors work in collaboration to achieve collective goals, rather focusing on an individual’s end. Jaguar focuses on exclusivity. It does not aim for the masses, for instance in India Jaguar entered the market around 2009 and by the end of the year 2014 there were only 20 distributors across all over India. Approximately 4 distributors a year speaks for the exclusivity itself. Jaguar is yet to manufacture production plant in India, for now it assembles all the components which are manufactured outside India. Jaguar has placed its showrooms and dealers in selected cosmopolitan cities; same applies for cities across the world.

It aims at quality and luxury rather than having extensive distribution network.

Jaguar introduced sports cars in 1940’s and 1950’s, which makes people associate Jaguar with ‘elegance’ and ‘quality’. The company does not practice intensive advertising on television; rather they have few selected short advertisements, which are smooth, stylish and powerful. Most of the advertising budget goes on billboards across prime locations in cities. They advertise through monthly automobile magazines, technology magazines also they sponsor premium events to increase the brand recognition in growing markets. Auto expo participation helps Jaguar to unveil latest models, sports cars, latest embedded technological features in the vehicles. Being a British company, Jaguar endorses through well-known British celebrities like David Beckham, Tom Hiddleston, Nicholas Hoult. They aim at being the bad guy in the car making industry unlike other car companies which strive to be a good guy. This concludes the Jaguar marketing mix.

Jaguar is a luxury automaker based in Coventry, England. It has its base in England but was taken over by Tata motors in 2008. Jaguar manufactures cars high end cars for British dignitaries; also it has royal warrants from Queen Elizabeth and Prince Charles. The latest Jaguar F model was launched in 2012 at Paris Auto Show. In 2013, Jaguar inaugurated a 100 million GBP R&D center in the University of Warwick, Coventry to foster technological developments in vehicles. Apart from manufacturing luxury cars under its banner, it also hosts Jaguar Land Rover which is known for its tough SUVs worldwide. Its inception can be dated back to 1934, by Sir William Lyons. Through all these years it has undergone phases of being an independent company and again going under big brand like British Motor Holdings, British Leyland, Ford Motor Company and Tata motors.

Jaguar faced huge losses until 2008, when it was acquired by Tata motors and it changed its fortunes drastically. It is highly focused on quality and luxury of its vehicles and has a tagline ‘Born to Perform’ with a famous Jaguar Mascot on its vehicles.