CNN marketing strategy helps the brand/company to position itself competitively in the market and achieve its business goals & objectives.

The product strategy and mix in CNN marketing strategy can be explained as follows:

CNN is a leading global news channel based out of USA. As a news and information delivery service, the main product in its marketing mix it offers is a news channel to its customers. It has several time shift services which are suitable for different countries such as CNN US, CNN International, CNN Philippines, CNN Indonesia, CNN-News 18, CNN Airport Network, CNN Turk, CNN en Español, HLN and CNN Chile. It offers its viewers rolling or continuous news updated frequently during the daytime hours and it broadcasts in-depth and factual programs during the evening and primetime hours. It also has a dedicated and interactive news website with a lot of capability such as VR and has been one of the most popular news website on the internet. Further CNN also maintains YouTube channel, Twitter account, RSS feed, and blogs and an internet live streaming to connect with its users. 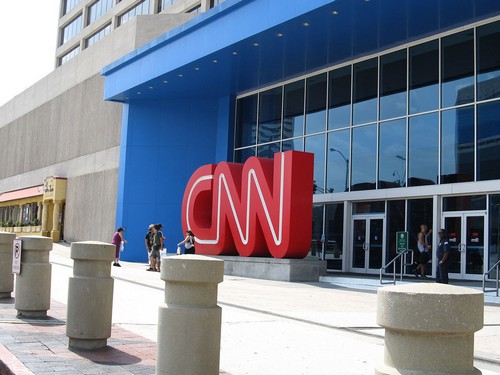 CNN news channel and affiliated services are free of cost for consumer.

The news network earns its revenue through Ads and banners on its news channels in between the news break as well as from sponsorship from various other companies for showcasing their products on the network. The advertising revenue of CNN depends upon the ratings of the show as well as the time of the show as the advertising costs are higher during primetime viewership. Further it charges a licensing fees or subscription fees from pay-tv service providers. Further the prices of the advertisements are dynamic with goes higher during major events. CNN is also experimenting with running advertisements in the news ticker tailored appropriately.

Following is the distribution strategy in the CNN marketing mix:

CNN has its headquarters at CNN center in Atlanta, Georgia but it has several broadcasting studios in several US cities such as New York City, Washington D.C., and Los Angeles. Further the CNN international is broadcasted in multiple countries around the globe with the channel available to more than 212 countries which has an approximate reach of over one billion people. Further, it has a mass market reach through its news website and internet livestreaming to anyone with an internet connection for free. The website is updated continuously throughout the day.

CNN uses several slogans to promote its news network and is currently using ‘Go there, This is CNN, The Most Trusted Name in News’ and has used several other slogans in the past to describe the news network. As CNN has been credited for broadcasting several firsts than any other news channel which had helped catapult it to a commanding position against its competitors and has been the most widely viewed news channel. The channel runs 24 hours, seven days a week for its viewers and has been keen in using new technologies to delight its customers.

Since this is a service marketing brand, here are the other three Ps to make it the 7Ps marketing mix of CNN.

CNN has always focused on people whether it its employees or customers. The service is delivered at arm’s length and is a low contact service but heavily relies on the news professional of gathering and dissemination of the news. The internal people include the news anchors and the reporters which are responsible for the service delivery while the service operations are not visible to the viewers. CNN news network boasts of having one of the best analytical teams and leaders in global news. It employs almost 4000 news professionals all around the globe for providing latest news to its viewers.

CNN has several business processes which help the brand have operations worldwide. The process involves scheduling the various shows all throughout the day. The daytime shows are updated continuously and offer on-the-go news to its viewers while on the other hand in-depth stories are offered during the evening and night time shows. The CNN news anchors deliver the news from the broadcasting studio and refer for on-the-ground reality with their news reporters. Further the news is also continuously updated on the website by a dedicated team of professionals.

The Physical Evidence includes the part of news studio which is visible to the viewers. Further the performance of the news anchors plays an important role in offering the Physical Evidence as the service is being delivered by them. The news tickers and the CNN logo also form the part of the physical evidence. Hence this completes the marketing mix of CNN.

Cable News Network which is popularly known as CNN is an American news and information delivery company. It was established to run as a 24-hour news channel by its founder Ted Turner, is owned completely by the American entertainment conglomerate Time Warner.

In the initial years, it faced a lot of competition from the already established American news Channels – ‘Big Three’ (NBC, CBS and ABC) but CNN successfully delivered several important news such as Gulf War, September 11 attacks before any other news channels and thus established a reputation for itself. It also has been advocate of using latest technology as it was the first news channel to use YouTube in a first ever web to television debate partnership for 2008 US Presidential debate.