Thai Airways marketing strategy helps the brand/company to position itself competitively in the market and achieve its business goals & objectives.

The product strategy and mix in Thai Airways marketing strategy can be explained as follows:

Thai Airways is the flagship airline of Thailand, which serves many global destinations. Thai Airways has a fleet of aircraft carriers like Airbus A330-300, Airbus A350-900, Airbus A380-800, Boeing 747-400, Boeing 777-200, Boeing 777-200ER, Boeing 777-300, Boeing 777-300ER, Boeing 787-8 and Boeing 787-9. The company also plans to acquire 15 next-generation wide-bodied aircrafts to replace its old Boeing 777 and is also planning to purchase some new narrow body aircraft. Also, these flights offer a variety of seat styles based like Royal First Class (First Class), Royal Silk Class (Business Class) and economy class as a part of its marketing mix product portfolio. Thai Airways’ frequent flyer programme is called as Royal Orchid Plus and has over 2 million people. The company also has another regional carrier called Thai Smile which is a lower cost airline. 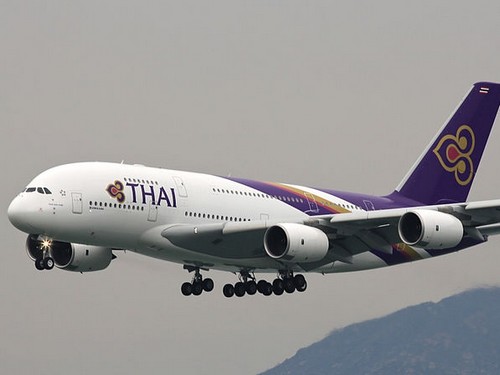 Thai Airways being an international flight the tickets are premium priced.

Also, the pricing varies depending upon the duration of flight, distance travelled, and the type of seat booked by the passenger. There is another domestic branch of Thai Airways called Thai Smile that is low cost low budget carrier. The company also has something called “Bonus Miles” which the passengers can earn during a flight and use it later.

Following is the distribution strategy in the Thai Airways marketing mix:

The carrier flies to 84 destinations in 37 different countries with a fleet of over 90 aircrafts. Thai Airways’ fleet fly to Europe, East Asia, and South/Southwest Asia and five cities in Oceania. The most profitable destination for Thai Airways in Europe with the maximum number of passenger operations. Thai Airways also planned 13 route schedules in Japan, Australia and India. Particularly in India Thai smile has a fleet network connecting Gaya, Varanasi, Jaipur and Lucknow. The year 2016 also saw Thai Airways planning to resume it routes that connected Da Nang, Kota Kinabalu, Luang Prabang and Mandalay.

The company is also planning to launch its services in Hangzhou and Zhengzhou.

Thai Airways uses digital media, print and tv advertisements to promote itself. The airways has also been ranked second by Go Asia’s “Best Airline Asia” Award. Thai Airways also does promotion by offering unique services like increasing the number of flights during important thai festival (e.g. Songkran) and serving special desserts etc. Thai Airways also has apromotional campaign to its name called “Thailand one and only campaign” under which a visitor can choose from five activities like Muay Thai, Traditional Thai dancing, Thai cooking, Making Thai style floral garland and speaking Thai and submit a clip based on these activities to try and win a contest. Participants not from Thailand get an opportunity to win a stay for a month in Thailand or a short stay holiday or a luxury package. Campaigns like this helps increase the social media visibility of the brand and help spread brand awareness through word of mouth marketing.

Since this is a service marketing brand, here are the other three Ps to make it the 7Ps marketing mix of Thai Airways.

All the staff in Thai Airways are trained for operation, marketing and managerial roles. Thai Airways is known for it competent set of chefs and flight attendants that offer excellent cuisine and services in flight.

Thai Airways launched a program called "The Most Hygienic In-Cabin Environment Program" which focused on the in-flight air quality, cleanliness and food safety. Under this program after each flight air circulation is checked, all waste materials disposed off, cabins are sterilised and fumigated by specialists. Thai Airways is also the first airline to install True HEPA air-filter capable of filtering 99.9% of dust and microorganisms on every flight. Hence this completes the marketing mix of Thai Airways.

During the 2000s Thai airline recorded a loss in 2008 for the first time in 40 years owing to high fuel prices and political instability in Thailand. The company through restructured initiatives was back on its feet and recorded a net profit of 2.5 billion Baht in 2009.