What is Mann-Whitney (U) test?

The Mann Whitney U-test is a nonparametric test which is used to compare two treatments in clinical trials and for analyzing the difference between the medians of two data sets. It is an alternative of t-test and the major difference between the two is “t” test is used to analyze population mean and Mann Whitney Test is used for analyzing population medians.

• Data should be non-parametric

• Data should be ordinal

As this is a nonparametric statistical test but both samples should have a similar distribution. Like many of the other statistical tests, in this also we need to start with a null hypothesis (Ho). In this test, there is no significant difference between the two samples.

The purpose of Mann-Whitney test is to rank the data for each condition, and then see how different the two rank totals are.

• Comparing the questionnaire responses relating to a new development

• Comparing the species diversity near to footpaths

To compare two traffic flows in a town:

A person was interested in finding out if a new bridge is made then how will it impact traffic (and therefore congestion) in the area near the construction.

He collected the data in two steps. He recorded the first data before the construction of the planned development (sample x).

He counted traffic (in both directions) on 8 streets around the development (selected randomly). He recorded for 8 minutes. He used a stopwatch for timing and a simple tally chart for recording the data. He completed the tally at different times of the day.

For the second set of data (sample y), He waited until 2 months after the development had been completed. Then he went to another 10 sites which were selected at random. This process was then done again.

He then devised the following null hypothesis (Hₒ):

Complete the table by ranking all the data from highest to lowest. 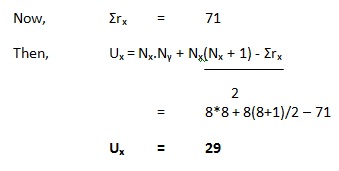 Hence, this concludes the definition of Mann-Whitney (U) test along with its overview.