De Beers marketing strategy helps the brand/company to position itself competitively in the market and achieve its business goals & objectives.

The product strategy and mix in De Beers marketing strategy can be explained as follows:

De Beers is a prominent brand selling diamond jewellery to customers globally. De Beers has been offering a wide variety of range of diamonds in its marketing mix from a long time for various occasions. It was De beers who has established diamond as a symbol of love which is still prevailing in our society. The range of diamonds offered by De Beers are High Jewellery (High Jewellery solitaires – 1888 Master diamonds, Creative solitaires, be spoke classic, High Jewellery design – Lotus by Beers, London by De beers, Talisman, De Beers Phenomena, Adonis Rose, Arpeggia, swan lake, De Beers Aria, De Beers Aura, drops of light, lea, lines), Jewellery with different categories as such as rings, necklaces, pendants, earrings, bracelets watches, men, Bridal Jewellery etc. Apart from the natural diamonds extracted from the mining process, De beers also make up synthetic diamonds in the laboratory by usage of different chemicals with the same chemical structure as of real diamonds. Synthetic diamonds have an advantage of being flawless and the whole process is eco-friendly. De Beers uses its same infrastructure to sell synthetic diamonds as of the real diamonds. 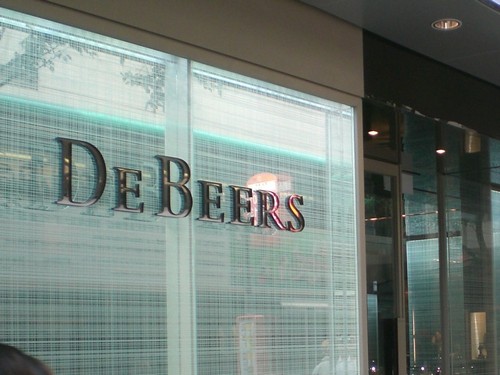 Diamonds are already a premium product and as diamond’s cost does not depend on supply but more on the market’s demand so De Beers follow a strategy of penetration price strategy in its marketing mix where price of diamonds varies according to the users demand.

By 2011 De Beers came up with a new model of charging more to its customers while accepting when the buyers are declining any stones. It was based on the perspective that if a company is making all its diamond sold then definitely company is not charging much. One more part where De beers is producing synthetic diamonds has an upper hand in pricing part because cost of production is way less than the real diamonds. As synthetic diamonds are sold at almost one tenth price of real diamonds so through it De Beers is able to pierce the low income market. Hence expanding its market share and generating more revenue.

Following is the distribution strategy in the De Beers marketing mix:

As the quantity of diamonds produced from a mine continuously vary and for the same diamond characteristics, quality and size we cannot be dependent on a single mine. So De Beers operates a lot of mines in order to meet the customer demands consistently in the market. Also De beers has risen up with a new channel of selling rough diamonds because every customer wants to maximize their own profit which is very well done by absorbing the margin between rough and carved diamond. De Beers in general maintain a complete chain with a specialization in exploring the diamond then extracting out through mines then either trading them as rough diamond or carving out to make it reach near the retailers or industry. With its synthetic fibers De Beers has also opened a new channel in which instead of putting it down in the market De beers needs to tell the difference of the two diamonds and then it is directly supplied to the retailers.

De Beers focuses on aggressive promotion to maintain its leadership as a top diamond brand. For promotion the De Beers has come up with a campaign “A diamond is forever” which has created a huge impact. This slogan perfectly matched the emotions of the customers by interlinking with a relation. With an advertisement De Beers made the diamond used in the rings as a symbol of love which increased the sales of De Beers drastically. De Beers use both traditional and digital way for marketing it products. With the increase usage of internet De Beers make sure that their product visibility increases on social media sites and there is also a proper channel for purchasing their products. This completes the De Beers marketing mix.

De Beers which was founded in 1888 with its supreme innovations, technology usage and engineering it has maintained monopoly in diamond industry with its mining and trading for more than a century all across the world. It was in 1939 when the De Beers came up with 4C’s system to qualify or distinguish any diamond which is still prevailing in the diamond industry. 4C’s are Cut (defining the perfect cut on tiny surfaces of diamond), Carat (It doesn’t talk about size but about the weight of the diamond), Color (showing the range of diamond color from being colorless to off-white and Clarity (these varies with inclusions and been graded as clarity to inclusions). With the incredible rough diamonds supply all over the world which was very well extracted by De Beers along with the very well strong marketing and schemes to negotiate with different nations government made De Beers to establish monopoly in diamond industry. De Beers currently owns around 35% diamond market share around the world which used to be at 45% at one time by selling 80% of all diamonds.

This downfall in market share has brought a threat to monopoly of De Beers which mainly occurs due to the different nation govt. policies and rise of big competitors.