Abercrombie and Fitch marketing strategy helps the brand/company to position itself competitively in the market and achieve its business goals & objectives.

The product strategy and mix in Abercrombie and Fitch marketing strategy can be explained as follows:

Abercrombie and Fitch, established in 1892 was known for its rugged, outdoor gear. It was known as an emporium that sold everything from golf clubs to safari wear. But in 1988 after being acquired by The Limited Inc, the brand was repositioned in the fashion-oriented casual luxury apparel business. The brand has a wide product portfolio in its marketing mix. Clothing was revamped and a new mission to target good-looking people led to the introduction of sweatshirts, sweatpants, graphic tees, polo shirts, and hoodies with massive A&F and moose logos, jeans, denim shorts, and flip-flops. With each passing year, Abercrombie and Fitch turned out to be a brand preteens, teens, and young adults. They have always kept their pace with the ongoing trends and have introduced wide range of different products for everyone with the changing market dynamics. A&F introduced various specific subsidiaries based on its target audience. Abercrombie kids, a children’s line was launched in 1998, Hollister Co., a line for younger teens was launched in 2000; RUEHL No. 925, a line targeting post-graduates was launched in 2004 and Gilly Hicks, a women’s line was launched in 2008. Numerous products have been launched under the below categories by Abercrombie and Fitch over the course of time: 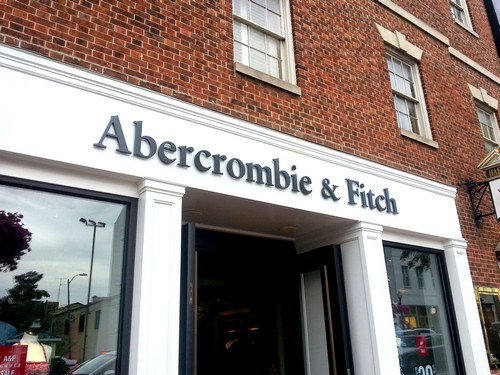 Below is the pricing strategy in Abercrombie and Fitch marketing strategy:

Abercrombie and Fitch has always aimed at providing a wide range of products that ensures both quality and comfort at the same time.

While Abercrombie and Fitch has always believe in catering to the needs of people who believes in being trend and flaunt their attires, it has also considered the fact of not creating a hole in their customer’s pockets. Abercrombie and Fitch value based pricing where pricing of the products is done as per the value it provides to the customer. This helped A&F to promote their products based on the value that the consumers perceive about the products.

Following is the distribution strategy in the Abercrombie and Fitch marketing mix:

Abercrombie and Fitch has always been very specific in creating the customer base by serving not only a quality product but an experience. With more than 300 locations in the United States and the ongoing expansion, Abercrombie and Fitch is aiming to be available to everyone around the globe. Abercrombie and Fitch earns around 36% of its net revenues from international markets, with Europe being the largest contributor to its international business. In late 2015 the brand launched its first store in the UAE, in one of Dubai’s luxury shopping centers. In conjunction with this partnership, the also launched its first store in Saudi Arabia, in the Red Sea Mall in Jeddah in 2017. These stores marked presence of A&F in Eastern part of the globe. The company operates 1,049 stores across all four brands.

Abercrombie and Fitch has also been very careful when it comes about the brand awareness. They tend to create a relationship between their images of their products customers. A&F generally uses people with bold ads to have an eye-catching impact. The major reason behind it is the Abercrombie and Fitch is now moving towards targeting an older consumer, someone more than just a rebellious teen. The brand has chosen all sort of channels to promote their product. Be it mass television advertisements or magazines A&F has leftist imprints throughout. The company is actively using social media to promote the brand. They have partnered with fashion bloggers and have incorporated Instagram as a major channel to promote its products. The company itself posts more than 300 posts per week on social media sites. Abercrombie and Fitch has faced lots of criticism because of its bold advertisement strategy even on Instagram but now the brand has deleted all of its older photographs and replaced them with a single image, with the caption: "People have a lot to say about us. They think they’ve got us figured out". The brand is repositioning itself using all these promotional strategies. This completes the marketing mix of Abercrombie and Fitch.

About Abercrombie and Fitch:

Abercrombie and Fitch, USA was founded almost 125 years ago with a motive to come as a pioneer in the field of style statement.

The brand has in ways of motivating the youth in adopting a new style of dressing. A&F has not only influence the people’s way of dressing but also built a sense of fashion.

Browse marketing strategy and 4Ps analysis of more brands similar to Abercrombie and Fitch. The Marketing Strategy & Mix section covers 4Ps and 7Ps of more than 800 brands in 2 categories.