Innovators are the first set of customers in the adopter categories as a part of the diffusion of innovation theory. They are followed by early adopters, early majority, late majority and then laggards at the end.

Innovators, also known as influencers,  are very important as a segment to the companies as their product’s reviews and perceptions depends on them. They influence the society or the people who are interested in a new product but are hesitant to buy it since they do not have much information about it. To know about the product they rely on innovators. So the product’s adoption in the late introduction phase and early growth phase depends solely on the innovator’s reviews about the product. In other words, early adopters look up to innovators to make themselves feel assured that the product is good enough to invest and purchase. Thus innovators have very high social influence and this makes them very important for the companies to attract.

To get the idea of social influence, many people get products first which is still in its development phase is being slowly adopted by few people mainly- Tech industry famous people; tech reviewers, employee themselves, and other major people related to tech industry. These people in a way are acting as influencers. All the reviews and specifications, descriptions, cool features that we listen about this product are coming from these people. Thus these people who are building this product’s perception among the target market segment are innovators. They have adopted the product in its early introduction phase and prompting people to adopt or not to adopt who might be interested in buying this product in the later stages. In short, these people are innovators. 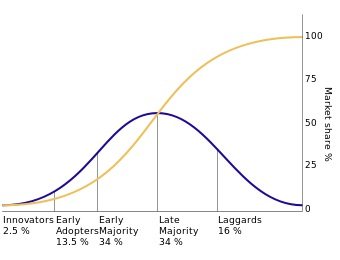 The above diagram showing Product Life cycle w.r.t. Diffusion of innovation and shows innovators in the beginning of the adoption cycle.

People who are and will be thronging apple stores for Apple watch. Take the case of iPhone 6 plus. Record no of people queued up outside apple store to get their hand on the new iPhone, Most of these people comments about the product like: It is the best iPhone, it is big and fun, it is the sleekest phone in the market, it has got all its features right this time, it bends because it’s too sleek, its software is not working etc., will influence the people who are thinking of buying it after some time. Innovator’s comment that it bends, has left a bad perception about the product among the people. And due to this many experts are saying that being an innovator makes you susceptible to these kind of failures and you should consider before you act as an innovator or adopt a product too early, next time.

Hence, this concludes the definition of Innovators along with its overview.