What is Island Position?

Island position is an advertising position in newspapers, magazines or websites that is completely surrounded by main contents of that platform with no advertisement near that position to compete for audience attention.

This position for advertisement are of higher value than the others because it is placed right among the main editorial reading contents, so the reader would obviously stumble upon the ad while going through the magazines, newspaper etc., which would increase the exposure of the ad among its target segment.

Due to the reason stated above island position are valued higher than other position. 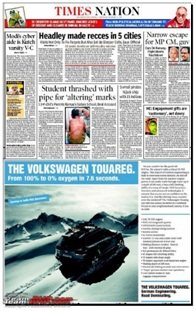 In this newspaper you see a big ad right in the middle of the news items, with no spaces for other ads and news articles. That position would be called an island position. As you can see in the picture above there is an ad of Volkswagen Touareg in the newspaper and there are no other ads from competitors or any other firms on this page to divert the attention of readers also the ad is placed among the reading/editorial contents of TOI and not among other ads, so this ad is a perfect example of Island position advertisement.

Hence, this concludes the definition of Island Position along with its overview.