Atmospherics is a term used to describe the design of commercial spaces. It was coined by the marketing guru Philip Kotler in a 1973 article.

Kotler said that customers do not buy just the physical product but the whole “package”- including service, warranties, packaging, ambience of the retail store, etc. The three most important aspects of atmospherics are: exterior structure; interior design and the design of window displays. And its three most important functions are: creating attention, messages (communication) and affect.

The term was borrowed from architecture and is sued to describe the use of spaces to influence people’s feelings, e.g. the use of music to soothe people’s nerves.

In a nutshell, Kotler has used the term to describe the use of space design as a method of creating/influencing some emotional changes in the buyers so as to persuade them to make a purchase.

Atmosphere encompasses all the senses of the customer, excluding taste, Thus, it is the influencing of what customers see, hear, smell and touch. It comprises the tangible aspects of the space as well as the customer’s mental perception.

Atmospherics plays a key role in places where the retailer has the option to design the store and play a crucial role in fashion stores, book stores and jewellery stores, apart from others.

Atmospherics becomes even more important when competition increases and there is very little price distinction. According to Kotler, atmospherics plays a key role in the positioning or the mental mapping of the product in the customer’s mind and when the product is targeted at particular groups.

The causal chain connecting atmosphere and purchase probability is: 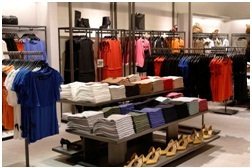 Atmospherics in a Zara retail store

Hence, this concludes the definition of Atmospherics along with its overview.