What is Early Majority?

Early majority are the large group of customers who buy products after a few customers have tried & given a positive feedback. Early majority is the group of consumers which comes after innovators and early adopters who take all the risk initially. Early majority tend to have small but some risk taking ability and adopt a new product after some time but they do before most of the other market.

Early majority is defined in Diffusion of Innovation theory which explains how a new product or technology is adopted (also referred to as TAM). The theory talks about five types of adopter categories of consumers, namely, the innovators, early adopters, early majority, late majority and the laggards.

The innovators and early adopters are the risk-takers, the technology enthusiasts who are aware of a new upcoming technology and won’t mind spending money to try it out. The early majority are the pragmatists who wait to buy the product/technology till they have established its usefulness and durability, as compared to earlier technologies/products in that field. The early majority usually has innovators/early adopters in its social circles and gathers feedback from them to make the decision of whether to buy or not. The consumers constituting late majority are the ones who do not have innovators/early adopters in their social circles, and don’t have the extra money to ‘try out’ new technology. They go for a new product only once it’s been widely accepted, i.e. by the earlier 50% of consumers. The laggards are the skeptics who do not buy until the product is well established, even old/outdated. 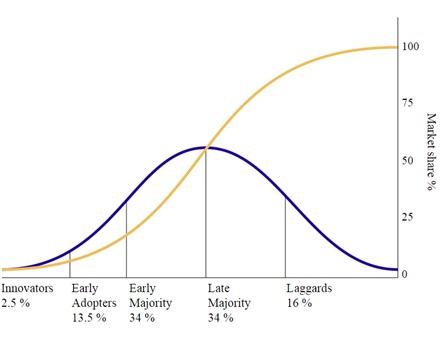 For example a new cell phone may have technological advancements like a 13MP camera with enhanced space, waterproof to a larger depth of water and extremely thin bendable body to attract the technology enthusiasts (innovators/early adopters), but the technology should be inexpensive and simple enough to be understood and adopted by the lay man (early majority). The early majority represents a large proportion of the market and getting success in this section of the market generally leads to better awareness and acceptability of the technology/product.

The exception would be of niche products where the brand wants to stick to the innovators and early adopters. In such cases, the products will have some specific and complex features at a higher price.

For example, while Apple’s products appealed to the innovators for their different hardware and software design and feature specifications, they did well with the masses too when the price was brought down a little, because the technology was understandable and the product affordable by the early majority.

Hence, this concludes the definition of Early Majority along with its overview.