What is Majority Fallacy?

Majority fallacy is the strategy error which leads to mistaken belief that largest segment of the market is the most profitable one. But in reality, majority fallacy is the least profitable one because of large number of competitors and huge competition in that segment. Companies think that directing a new product to the largest section within the market will be most profitable due to large number of potential customers. Majority fallacy tends to avoid the small segments. But gradually, it is becoming inferior when compared to targeting audience of smaller segments.

The majority fallacy concerns where a new brand entry into a market should be positioned with respect to physical or perceptual product attributes.

The different majority fallacy kinds in marketing are:

1. Ad Hominem Fallacy- When an arguer uses this fallacy, he or she attacks the opposing individual or group instead of addressing the present argument. That is when a business spends more time discussing the negative aspects of their competitors rather than making an argument and presenting evidence that make their business appear as the logical solution.

2. Post hoc, Ergo Propter hoc Fallacy- When an arguer assumes that because one event follows another, the initial event caused the second. For example, after you began using a product, you felt your health improved. Simply because the health improvement occurred after you bought the product doesn’t mean that the product caused the improvement. It might be because you started eating healthy.

3. False Dichotomy Fallacy- When an arguer gives an audience two solutions to a problem, then dismantles one solution so that the other seems like the only logical choice. The fallacy creates an illusion of only two choices, then manipulates the audience toward one desired outcome. 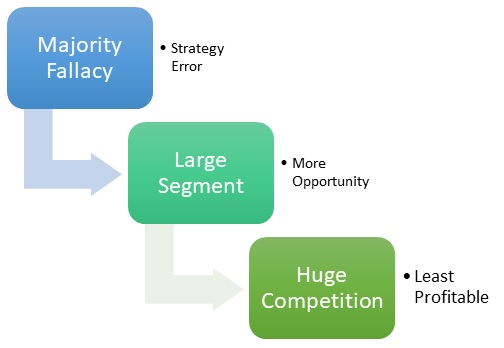 1. Companies establishes itself faster in the new market due to similar surrounding.

1. It causes a firm to fail due to intense competition

2. Small segments remain unserved which might have greater opportunities

For example, a bunch of fast food stores around a college campus. The location is good but there are many other fast food stores present along with yours. This is a majority fallacy because the place attracts the crowd which also increases the competition among the fast food stores, everyone competes and gets marginal amount but no one makes much money.

Hence, this concludes the definition of Majority Fallacy along with its overview.