What is Diffusion of Innovation Theory?

Importance of Diffusion of Innovation Theory

Diffusion of innovation theory follows the product adoption trend for customers. The time taken by the new idea or product to spread from one consumer to another is called the diffusion rate. It depends on various factors like the product’s perceived advantage, risk involved with the product, ease of using product, benefits associated with the product, external appearance, trial offer, price, return on investment for industrial products. This theory distinguishes five stages in which the product falls under different user groups that uses the product. This theory gives a clear idea about how a product or idea develops among users. 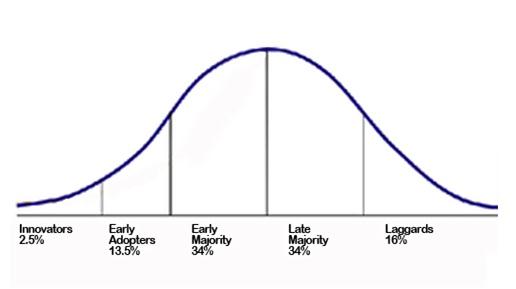 There are 5 well known adopter categories, which are explained as below:

1. Innovator- Innovators are the people in the diffusion of innovation curve who don’t mind to try a new innovation. These people are interested in new ideas & are even willing to take more risks as compared to others.

2. Early adopter – Early adopters are the people acting as opinion leaders. They enjoy leadership roles. They are comfortable in adopting the new idea as they are already aware of the need to change.

3. Early Majority- Early majority are the people do not belong to any leader category but do adopt the new ideas before an average person. These people typically require some kind of evidence before they are ready to adopt it.

4. Late Majority- Late majority are the people are skeptical of the innovation & would not try until the innovation has been tried & tested by majority. To attract such people you need to have information such as how many people have tried the innovation & have adopted it

5. Laggards- Laggards are the group of people in the diffusion of innovation theory who are hardest to convince as they are bound by tradition. They are very conservative & are very skeptical to any change. To convince them one requires all kind of statistical data, appeals & testimonials of other adopters.

Example of Diffusion of Innovation Theory

Let’s say a pharmaceutical company invented a new drug. Now they will work as promoter so that they can make a group of doctors (that will form the social group) to adopt and prescribe their new drug. Doctors might be more likely to prescribe the drugs to the patients when they heard good about the drug from their colleagues instead of medical representative or they might not go for the drug if they heard something bad. Other doctors might use the drug when it become old and popular. And some might not at all use the new drug as they have an alternative for the same.

Other Theories of Diffusion

There are other theories that explain the theory of diffusion:

1. Two step hypothesis- Ideas flow from mass media to the population via opinion leaders. Opinion leaders pass their own interpretation while passing the information.

2. The tickle down effect- Products flows vertically from upper class to lower class within the society, each social class influenced by a higher class. With time products become less expensive and comes within the reach of lower class.

3. Crossing the chasm model- There is a chasm between the early adopter of the product and early majority. Marketers should concentrate on a single group of customers at a time and make the product cross the chasm.

4. Technology Acceptance Model (TAM)- When customers are provided with a new technology then the perceived usefulness and perceived ease of use influences their decision about how and when they will use it.

Hence, this concludes the definition of Diffusion of Innovation Theory along with its overview.