Garbology is the study of the material discarded or the contents of domestic dustbins to analyze the consumption, social or cultural patterns of the households. Garbology, a niche of archaeology, reflects upon the lifestyles of people under the study.

The concept of garbology was introduced by Professor William Rathje of the University of Arizona in “From Tikal to Tucson” article. Since then, the concept has gained a lot of importance and proved to be very imperative in studying the consumption pattern of the population and even in fields like crime investigation and journalism.

Garbology or the study of garbage may be as simple as excavating a portion of a landfill or dissecting the contents of a dumpster but it provides startling findings of various aspects of the society. Most important is the consumption habits of individuals in a society. Studying the trash or waste helps in the verification of presumed thoughts about habits of certain groups. Waste management is an important aspect of environmental management for a company. 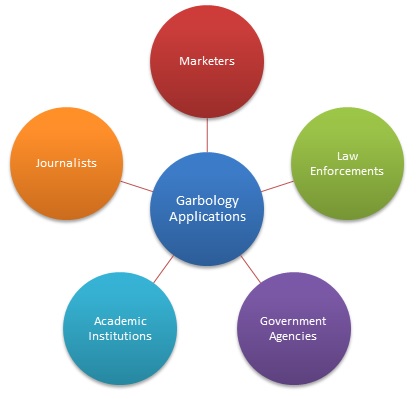 In marketing, garbology is used by marketers to study the consumption habits of their target groups by studying the trash of such households. The hidden gaps can be identified and the necessary steps can be taken based on findings. It also helps save on items like dunnage while packaging, which is a cost to company. The concept was also made in use by government agencies and law enforcement, which make use of the concept by searching the evidence of illegal activity. It also helps journalists in an investigation by studying trash produced by a household or a person to gain more insights for their story. On the academic front, many schools, colleges, universities, and recycling centers offer several courses on "garbology” in order to increase and improve the community awareness in the types of trash and the quantity of trash generated by the population on a regular basis.

1. Garbology enables marketers to study the product gaps in demography and identify the consumption patterns of households

2. It enables to study the consumer behavior by studying the amount of edible food items beings completely thrown off or half eaten.

3. Garbology has proved to be imperative in fields of Crime Investigation and journalism.

1. It requires an extensive eye-to-detail. Not studying the trash carefully may end up giving inaccurate results and findings.

2. The trash produced by households is not uniform with time and thus, seasonality has to be kept in mind or an accurate time frame to be chosen while doing such kind of research.

For example, we will see how the trash from a household can be helpful in analyzing its food consumption habits. A small-scale study was done by Jill Baguchinsky on a household on Marco Island, Florida to study the eating habits of a household by analyzing its domestic trash for three days. The three Day trash weighed six and one-half pounds out of which non-food related trash was separated and the rest was studied. After studying this trash, several inferences could be found out.

1. There were some twelve-pack boxes of beverage and soda in the trash but not all the empty bottles were in the trash which implies that the family makes an effort to reuse some of its trash.

2. There were some plastic bags found in the trash implying that all the recyclable items were not recycled by the household.

3. The empty boxes of take-out pizzas, packets of frozen food, easy-to-prepare meals like hamburgers indicated that probably both the parents work and thus, they always do not get enough time to prepare meals.

4. Also, from the empty food packets, it was observed that the family does not consume a balanced diet and consumes a lot more carbohydrates in the form of bread, grains and dairy products as compared to protein/meat products.

Thus, ‘Garbology’ helped to analyze so much about a single household by carefully studying the garbage thrown out by

Hence, this concludes the definition of Garbology along with its overview.