What is ADL Matrix?

The ADL matrix by Arthur D. Little is a portfolio management matrix which helps managers discern their SBUs strategic position depending upon 2 dimensions- SBU’s life cycle and Competitive position. There can be a total of 20 different strategies which can be applied by an organization based on where they are in the matrix.

Let us have a look at the lifecycle stages and competitive positions:

In this phase the organization grows even with competition as it is acquiring new customers. This is the place where it holds the market position and even grows it.

This is when the company is now at a stable position where it is not growing further but has strong brand, product portfolio and customers.

This is equivalent to decline stage in PLM where the company starts losing the market and the sales/revenue start falling.

Competitive position can also be either of the following

The position of a company falls into this category if it is a clear market leader or has a monopoly position. Example , Intel in microprocessors.

In this case, the company might not be a monopoly but definitely has a strong presence and loyal customers.

Companies with favorable competitive position usually operate in fragmented markets and no single one controls all market share.

Here each company caters to a niche segment defined by a product variety or segmented demographically.

In this scenario, the company financials are too weak to gain a strong hold in the market and is expected to die out within a short span of time. 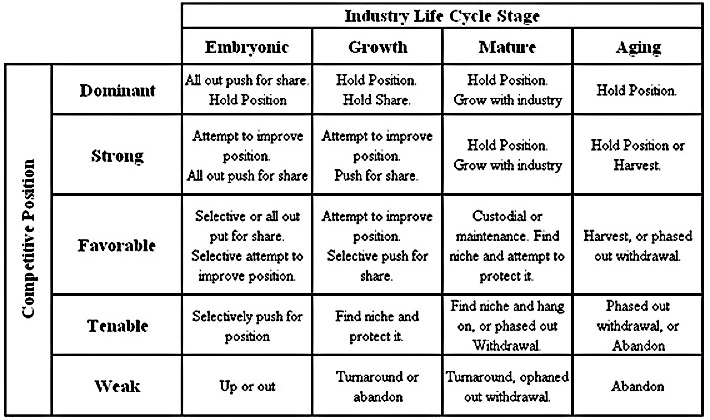 Thus depending on where a particular firm lies on the ADL grid, a suitable set of strategies should be adopted by it to gain greater market share and move to higher stages of life cycle and competitive positions.

We can try to understand different positions and strategies with an example of PC manufacturers who moved into smart devices.

A lot of companies like Lenovo have changed and evolved themselves as we see in the matrix. They were making laptops at one time and were very strong in the market for those devices. So they were in Growth-Strong phase but then the world started to move to smartphones and tablets. They refocused on smart devices but also kept their hold in the laptops segment. Not only they became dominant in the laptop segment but they also became favorable in the smartphones and tablets.

Hence, this concludes the definition of ADL Matrix along with its overview.