GD Topic - TV is no longer an idiot box?

6 people are having a discussion on the topic (Isha, Neetu, Krishna, Sarthak, Mohit and Rohit)

Isha: Hello friends, today the topic of discussion is TV is no longer an idiot box. Television has remained the entertainment box right from the day it was introduced. But here our debate goes that whether TV actually was an idiot box and it was has it really transformed from its impression of being idiot box?

Neetu: Yes, I will affirm that TV was actually an idiot box. I would initially like to link it with the reason that when TV was introduced, there was not many entertainment options and TV was the rarest and most precious among all modes of entertainment. So under this monopoly among the modes of entertainment whatever was displayed was awed by people without judging it much from any critic aspects. But today I feel since everyone is surrounded by many options for entertainment, the level of quality of content being displayed is increased.

Krishna: In today’s world of fast life, people spare only an hour or even less than that to watch their TV. And the demand of that small duration is obviously qualitative. So for such corporate personals for whom quick go through in short span is needed, the content and the level of various shows s well as news channels has increased. Instead of sitting for entire hour, now news channels have come up with content like 200 news headlines in 2 minutes etc.

Sarthak: I am not in favour of the stand that has been taken. I believe that TV still is the same idiot box as it used to be 50 years back. It still lacks much of the credibility also along with the richness and quality and maturity of the content that the intellectual minds of today demand. 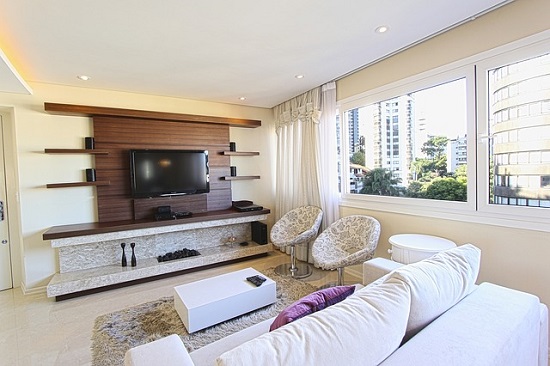 Mohit: I am in complete optimism with the fact that TV can no longer be called as an idiot box. It is not only about the level of content being displayed, but it itself as a television box has become a smart box in it. Today TV comes with all the facility of YouTube, photo viewers, pen drive slots etc. It is no longer the frame of just a television but it has advanced a lot in much smarter senses.

Isha: Yes, taking the point of advertisements forward we can support it with the example of the simpler ads getting more advanced and logical these days. Like the advertisements of brands like Cadbury transforming each time with the kind of class and target it focuses upon.

Rohit: But friends we cannot ignore the fact that TV still displays shows that makes no sense to common man. In fact today TV has many competitors and though it may try being quite sensible, but people have many smarter options to look upon on internet. Thus the comparative aspects tell us that though the level of content being displayed along with the technology has increased but still TV is comparatively idiot box when perceived in comparison to other options like internet existing today.

Isha: Yes, but TV in its own comparison has progressed a lot to move to the smarter arena. TV and its content in the form of channel have gone through segmentation. If compare with the Indian Television Channels, then previously we had only 1 channel DoorDarshan, but today due to the impact of privatisation we have all sort of channels for geography, food, entertainment, knowledge and sharing, news, travel and much more.

Krishna: Also there is segmentation based on regions. It happens many of the times that people in rural India might not be well versed with Hindi or English. But today television has reached their door steps and they can watch it in their own regional languages.

Rohit: Regionalisation in TV content might be good, but it again has nothing to do with TV being smart box. Let it be in regional or in national language, TV still shows some content which is not up to the mark of the level of mind and intellectuality or the expectations of people.

Mohit: It could be so. There are always two facets of everything and so is the case here. But still I feel that there is much more the positive side to look upon. The regionalisation of content is something that I can back with an advantage also. Considering India being with major population of farmers in it, has progress a lot with the advent of TV being smarter day by day. The Krushi education Campaign which educates farmers by the means of some training shows and information transmitted on TV is the best example of smartness that has been offered.

Isha: yes even I believe that there are much more optimisms in this topic to look upon and since we have very less time remaining with the discussion, I would like to say that TV has been under transformation of becoming smarter with the same pace as the world itself is going in the smart era. And in fact I would like to project the fact that in some cases not only as a source of media but in technology of Television also the changes have been made at a smarter edge.

Neetu: Apparently I also believe that in no case TV can be called an idiot box though we need to ignore some of the opposite parts that we looked upon. Everything has two sides but still from the discussion here we can come to a conclusion that TV has gone under changes and can no longer be quoted as an idiot box.

Right from the beginning TV was actually under transformation due to the increasing expectations and demand of users as well as competing from other media sources like internet and laptops etc. Though there are many smarter sources for information and entertainment, yet TV is an inevitable source which a user cannot avoid watching it and it has been under great changes towards smarter edge not only in form of its content but also catering many needs of users by segmenting and catering the requirements. Still there are many things that may not appear as smart and logical when being displayed on TV to some of the audiences, but TV has surely transformed to a smarter resource and is no longer an idiot box.

1 Previously when TV was introduced there were not many competitors and that’s why it was the only source of entertainment. Pertaining to this fact, whatever was shown was accepted by people.

2 Today people have become smarter and so is the demand from the TV and its content. People no longer accept any content that do not make any relevant sense.

3 The corporate persons and other audience have become much busier and their demand of spending just an hour a day with TV is catered in the form of quick summary of news headlines, cricket match highlights, weather forecast summary, stock market summary etc.

4 Advertisement is the major content that has undergone transformation. Smarter and more logical ads are getting displayed to match the intellectuality of the audience today.

5 Also with the help of IT, the advertisers are able to detect the region where a particular ad is being played and can play that ad in the regional language for that particular duration to capture that market.

6 Segmentation of channels and showing of regional language contents is a smart move ranging from one single channel of DoorDarshan to innumerable channels for each segments.. Also campaigns like Krushi Education and training programmes being held on TV like maths classes, cookery shows etc is also on a smarter edge.

7 The television technology has also enhanced with smart TV available in the market, on which apart from viewing channels, one can also handle it as a semi computer to do various digital tasks. One can also operate internet and websites like YouTube, Google etc and also it Is USB enabled.

« Whether Digital Education has taken over Traditional Education? Industrial growth and Environmental care do not go hand in hand »
Important Group Discussions
Share this Page on: