Wage refers to the amount of money that an employee or a worker is getting in lieu of the work that he/she is doing. Talking more specially in HR terms wage refers to a defined amount of money given to an individual for work or services which is given on a daily or weekly basis. It is very different from the term salary but people often confuse between the two.

Let’s understand the difference between the two by an example

What is the difference between Wage & Salary :

Salary is paid on a monthly basis and is independent of the number of hours whereas wage is paid on the basis of number of hours of work, hence is given on weekly basis and the person getting the wage is a non-exempt employee. It is monetary in nature and is an expense to the company (because it is required to run the business). Difference between the two has been showed in the table below: 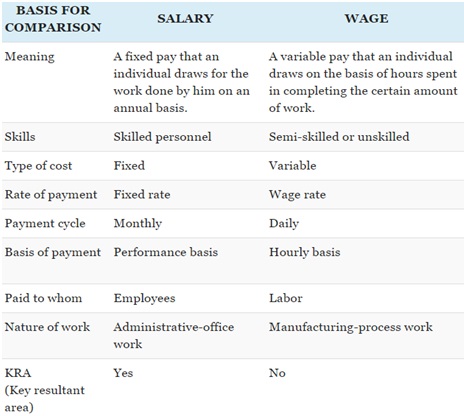 Wage rate i.e. the amount a person gets per hour of work, is influenced by the existing supply and demand conditions existing in the market, tradition and also on the rules & policies existing in a particular country/area. Also, seniority and social structure play a crucial role in deciding the wage rate.

Differential wage rate exists based on gender and race. For eg. for the same amount of work women get 80 % of the median wage of their male counterparts according to a survey conducted by US Labor department.

1. Basic wage as agreed in the contract.

3. Fixed payments based on the turnover of the company in a particular period.

For all these the amount that the employee gets should not be less than the minimum wage agreed in the contract.

Disadvantages of Being an Employee on Wage:

Employees in the non-management position are usually paid on an hourly basis and hence are at loss in the following manner:

1. Employees who are paid a wage earn less for more work compared to their salaried counterparts.

2. They do not get (or) get less benefits in terms of the perks.

3. They don’t have any job security and can lose their job at any point of time.

4. They rarely sign a work contracts and hence are very much liable to suffer due to improper safety conditions at the workplace.

Advantages of Being an Employee on Wage:

According to US survey on wage and other incentives, wage incentives are the cheapest, easiest and fastest means of increasing the productivity of the employees.

1. It gives the employees an opportunity to earn more and henceforth raises the standard of living.

2. Such incentives help in improving IR & discipline within the organization.

3. Also,, such incentives act as a reward for good performance of an employee and hence encourages the workers to work well.

4. Such incentives bring about the management & workers on a common page setting a cooperative mutual goal for both.

Hence, this concludes the definition of Wage along with its overview.