What is 360 Degree Feedback?

It is essential for an organization to evaluate the performance of its employees. If an employee is under performing, they must be warned and if they are doing well, they must be rewarded. This can be done by understanding their performances based on a feedback. This is why 360 degree feedback is important to an organization. This feedback may be used as an input to the performance appraisal process. It may also be used to identify competency gaps to administer relevant training to the employee. Such feedbacks can help in training & development programs of employees, and help in their career development. Important employee skills like leadership, time management, team management, communication management etc. can be developed. Similarly, a feedback from vendors & suppliers, known as 540 degree feedback is also used by companies.

This 360 degree feedback/assessment is also known as a multi-rater or multi source feedback as feedback about the employee is gathered from multiple sources and not just the reporting manager as in the case of a traditional performance appraisal system. A good and constructive feedback helps in employee motivation as well as helping in hearing out the employee voice. 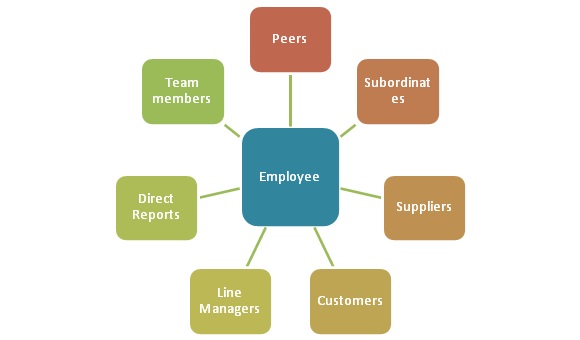 The above image shows the 360 degree feedback of an employee based on reviews from peers, subordinates, suppliers, customers, managers & other team members.

There are several advantages of 360 degree feedback. Some of the benefits of such a feedback system are as below

1. It helps in evaluating the overall performance of an employee

2. 360 degree feedback gives a complete view of the work the employee has done, and just based on some supervisors review

3. This feedback shows all the competencies of an employee across various domains and verticals of business

4. Based on 360 degree feedback, new training programs can help develop the employee even more

5. The employee can work on his or her shortcomings based on the feedback given by everyone

There are certain drawbacks of this type of a feedback system. Some disadvantages of 360 degree feedback are:

1. Favoritism can affect the feedback of certain employees who otherwise must be working well

2. 360 degree feedback mostly gives qualitative feedback and might overlook the quantitative performance of an employee

3. Unfair feedback from some people may lead to an ambiguous ratings of the employee's performance.

Hence, this concludes the definition of 360 Degree Feedback along with its overview.