Bonus is the extra payment or financial component which is received as a reward for doing one’s job well. Bonus usually comes along with salary of the employee. It is the gesture of appreciation from the organization towards their employees. Bonus is given globally in most of the organization across different nations. It is not only given for the job well done but also to keep the employees motivated and focused.

The various types of additional incentives which can be paid to an employee are:

This kind is given to employees based on their performance in a given period e.g. year or quarter

This type is linked to some occasion or festival in the local location of operations of the company e.g. New Year 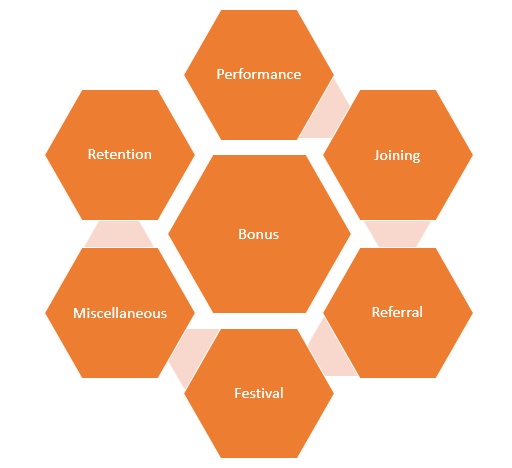 When a new employee joins a company, he or she can be offered a one time joining amount.

This is a bonus which is given at a very early stage of employee's career path in a company as compared to other types of bonus.

This is given as a one time payment to retain the employee in the organization.

This can be given on some special event e.g. on 25th anniversary of the company, every employee gets a smartphone. The above list consists of the common bonus types we have in various companies. There can be very specific bonuses which a company gives to their employees as well.

The reason of the payment of bonus is basically to bridge the gap between the ideal of a living wage and the wages paid. These payments keep employees motivated throughout the year as they anticipate payment over and above their wages. A good amount can lead to retention of talent and overall improvement of employee relationship within the organization as well.

In India the practice of paying an incentive was first started during the World War 1 when few textile mills granted 10% of wages as the war incentive in 1917, under rule 81A of Defence of India Rules. On the 6th of December, 1960 the Government of India appointed a bonus commission which was later replaced by the Payment of Bonus Act, 1965.

Some key advantages are:

1. These components keep the employees motivated.

2. It bridges the gap between the ideal of a living wage and the wages paid.

3. The gesture shows that the organization values and acknowledges good work.

1. It adds to the extra cost incurred by the organization.

2. It decreases the profits.

3. It increases the expectation of the workers for an incentive on every accomplishment.

Example 1, if an employee is working in an organization and has performed really good over the months. The organization wants to acknowledge the efforts of that employee , so they give him an amount in addition to his salary which is known as the bonus.

Example 2, If a worker is working in a plant, the production plant is running in good profits and it’s the Diwali time. They want to give their workers an additional amount along with the current wages to meet the upcoming extra expenses due to the festival which again is known as bonus.

Hence, this concludes the definition of Bonus along with its overview.