What is Forced Distribution Method?

Forced distribution method is one of the most widely used and also the most criticized method of performance appraisal. This is a rating system that is used all over the world by companies to evaluate their workforce. It requires the supervisor to assess each employee based on certain pre-determined parameters, and thereafter rank them into 3 or more categories. Most commonly, the employees fall into excellent, good or poor categories, which can be expanded by the organization to a 5-point scale as well. It was introduced by General Electric in 1980s, during the era of Jack Welch who was infamous for cutting down GE’s workforce regularly by firing low performers.

The forced distribution method is also called bell-curve rating or stacked ranking. This method is preferred by many employers as it creates a visible differentiation between performances of each employee in the organization. This method of performance management typically chooses the normal distribution curve to represent the performance distribution. This ensures that a small fraction of the entire workforce is to be placed at the extremes, which is the outstanding performers and poor performers. A relatively large section of the workforce fall in the middle of the distribution. This is illustrated in the image below. 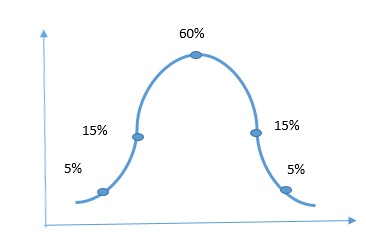 There are several issues associated with this method of performance appraisal. Firstly, the manager must clearly understand the parameters on which employees have to be evaluated. These parameters must be defined as objectively as possible to avoid unambiguity. Though this method is known for cultivating a culture of high performance in the organization and is also simple and cost-effective to implement, it is criticized because of various reasons. Often, the employees feel that the evaluation is not fair and hence it can lead to unhealthy competition, rivalry amongst employees and loss of morale of the workforce.

For example, a manager of XYZ corporation evaluating 30 employees can be instructed to put 5 employees each in the ‘outstanding’ and the ‘poor’ category, whereas 20 will fall in the range of average performers. In this manner, the ratee (manager) has forced the distribution of level of performance of each of the 30 employees into one of the three categories.

Hence, this concludes the definition of Forced Distribution Method along with its overview.