Fired is the termination of employment by the employer and is against the will of the employee. Fired is an informal term and the appropriate formal term is retrenchment. There is a huge stigma against being fired and employees do not mention jobs in their resumes in which they were fired soon or had some serious infraction to be fired.

Other informal terms used are sacking and dismissal. Some slangs used are getting the boot, being handed the pink slip, getting laid off, axed, canned and let go. It is important from a recruiter’s point of view to look for gaps in a resume of a job seeker as gaps in a resume can mean that there is a probability that the job seeker was fired. This stigma can be a problem, especially if the employment contract is an at will employment which means that the employer can fire the employee with giving any reason but at the same time the employee can also leave the job without paying for any damages or serving a notice period.

Reasons for Employee Being Fired

Some reasons why employees are fired by companies: 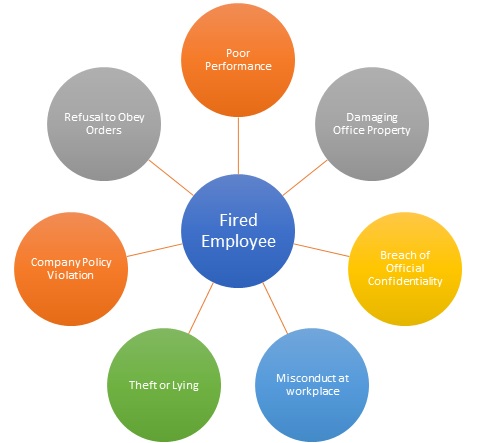 Employees are fired for a variety of reasons, the employer may pay compensation to the employee when the employer fires the employee according to the conditions given by the contract signed by both parties. Employers usually let employees resign so that they have a chance of being re-hired as getting fired would create a red flag in their resume and organizations might refrain from hiring them. Employers force the employees to leave the organization using various methods like assigning undesirable shifts, degrading working conditions, assigning work in hostile geographical conditions and relegating employees to menial tasks.

An employee A was caught leaking organization data of his/her previous employer to the new employer, so the previous employer issued an order from the court to prevent further damages to the organization. The new employer had stated in their manual of policies that getting and using data from other organizations was strictly prohibited as it could affect the prestige of the company to attract the right employees. So the new employer started disciplinary proceedings against the employee starting with a preliminary enquiry. Employee A was feeling that it would be better to resign as being fired would lead to no organization hiring. This is sometimes termed as ‘civil death’. So, A decided to resign from the organization and relocate to another country instead.

Hence, this concludes the definition of Fired along with its overview.