What is Day-After Recall Test?

Day-After Recall Test is a method of measuring an ad’s effectiveness in terms of consumer’s recall of an ad, a day after the exposure to the ad. It is conducted to make sure that the intended message of the ad is getting passed on to the consumers. Day-After Recall measures the percentage of people who remember seeing the ad 24 hours after it was aired on television.

Nowadays several de-contextualized content in the advertisements are aired apart from some relevant content that a marketer wants its customer to pay attention to. As a consequence, it provides a limited measure of attentioning dimension of communication effectiveness. So, several hundred households are contacted until about two hundred people who saw the ad at the time of airing are found. These people are then asked whether they are able to have a strong brand recall seeing any ads for the relevant product category. Day-After Recall test is being performed through collection of audience data in interview surveys or self-completion questionnaires that respondents are asked to recall. Thus, this is a valid test as it helps the brand to achieve its objective of grabbing customer’s attention towards the product and increase awareness of the brand. 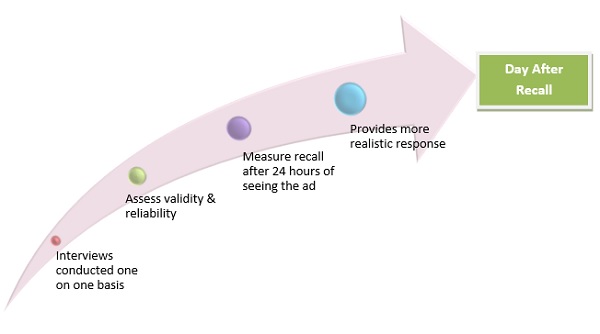 Importance of the Day-after Recall Test

1. A Day-After Recall test helps in measuring the number of people who recall seeing the ad 24hrs it was aired on the television.

2. It is also used to assess the validity and reliability of the context.

3. Day-After Recall is done to make sure that the content and context of the ad message is passed on to the target customers.

4. The consumer response of their recall is verbalized and is possessed by conducting interviews on a one-on-one basis.

5. This Day-After Recall test results in increase in the sample size.

Some pros of these Day-After Recall are:

1. It is conducted to make sure that the intended message of the ad is getting passed on to the consumers.

2. They are field test. This is being done to provide a more realistic response profile. This tests provide certain standard rules and procedures to be followed in order to compare the performance of their ad as compared to others.

Some disadvantages of Day-After Recall tests are:

1. High cost because of the expense of individual interviews.

2. The programs in which the ad appears may lead to different recall scores for the same brand or product category.

3. In addition, studies have shown that recall is a measure that the ad has been received, but not necessarily accepted, and not predictive of sales.

1. HUL relayed an ad for AXE signature on television, in which a subtle hint of romance is used along with its main message content, i.e., long lasting fragrance. The consumer after watching the ad is interviewed after 24 hours. If the consumer only recalls the romance part then the ad is not considered to have done well on its recall test.

2. Coca-Cola is able to retain its customers by providing them with unique experience through their happiness-focused approach of marketing. This leads to increase in its fan base even if customers can get similar flavors from other brands.

The response of the consumer is taken by conducting one to one interview for every consumer. This method is being used widely these days because of its problems. Problems of this method include the expense of individual interviews and the tendency for some people to report seeing the ad when they actually have not seen it.

Hence, this concludes the definition of Day-After Recall Test along with its overview.