What is Gross Rating Point (GRP)?

Gross Rating Point (GRP) is a measure of size of an advertising campaign across media channels or over a particular channel. GRP is not a measure of the number of audience reached, in fact it quantifies the impression formed on audiences and hence as a percentage of target population, it can be greater than 100 as well. GRP is frequently used by media buyers to measure the strength of different components of a media plan.

GRP is a fundamental metric to measure the effectiveness of your advertising campaign but doesn’t provide you the specifics if you are looking for them. But GRP by itself fails to provide any kind of analysis. It doesn’t indicate the credibility of a media channel with the audience. Also, you might not even have reached all the audiences you assumed you have reached through the GRP. Meaning that you might have aired your commercial during the break of a certain TV episode and calculated your GRP based on the episode’s Target Rating Point (TRP) but in reality your audience might have switched to some other channel during the break which is not covered by the GRP. 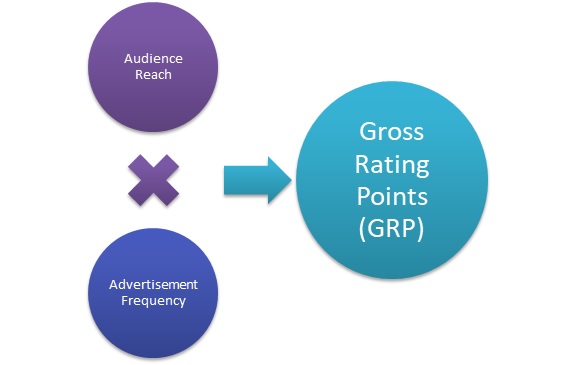 GRPS can be applied to different types of media including:

Typically, 100 GRPs can have different meanings:

1. 100% of targeted population was reached once/week OR

2. 1% of targeted population was reached 100 times/week OR

3. Any combination as long as it produces 100 GRPS

The advantages of using GRPs:

1. Tells us how to approach our target population

2. Tells us how to spend the budget

The disadvantages of using GRPs:

1. Does not give a measure of a campaign’s profitability

2. Can underestimate a campaign to a smaller target audience

3. Can overestimate a campaign to a larger target audience

Hence, this concludes the definition of Gross Rating Point (GRP) along with its overview.