What is Target Rating Point (TRP)?

Target Rating Point (TRP) is an index which gives us an idea about reach and frequency of advertising messages towards a target audience. In simpler terms, TRP basically denotes how many people or audience is watching a particular advertisement. TRP is a method to determine the effectiveness of an advertisement. TRP, also known as Television Rating Point, is a tool that measures the viewership and popularity of a channel or a programme. TRP helps in determining which shows are viewed the most by the people and the mood of the people regarding viewership of the channels and the programmes.

TRPs help in deciding which market to invest in advertising, especially for smaller business. On the other hand, Gross Rating Point (GRP) measures the total audience reached. The strategy is to invest in those markets which allow deeper penetration into the target audience i.e. higher TRP. 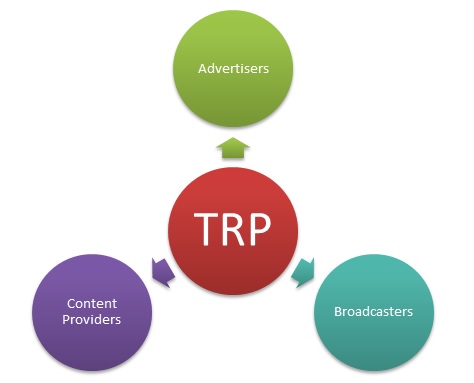 How TRP is Calculated?

TRPs is calculated for various media like Television, Radio, Print, Internet or offline advertising. The procedure is almost same for all media with slight difference in formula or some steps. Most popular among all media is Television which is explained here. The most efficient method for Television is TAM (Television Audience Measurement).A device known as People Meters is used to measure the time and advertisement which people watch throughout the day. It is fitted in the television of few thousands of audience (as it is too costly) depending upon factors like location, class and demographics. These are considered as samples to study whole population. The people meter records the timing and advertising across all the samples. Media companies like Nielsen measure total viewership for television show or advertisement, while Arbitron does the same for radio. A monthly report can give the viewership status of the advertisement.

To measure the TRP, a device is used which is called People’s meter. The device is connected to Televisions in a few thousand households spread across different geographical and demographic regions. People’s Meter notes down the time, channel and the programme that a viewer watches in a day. The data for a 7-day period or 30-day period is collected and analyzed from all these households which then gives the viewership status of the channels and the programmes. The TRP in India is measured by BARC (Broadcast Audience Research Council). BARC publishes weekly TRP results of all channels and programmes on its official website.

TRP measures the impact on target audience while GRP denotes the total audience. For example, if you buy 100 GRP's for a television spot, but you are aware that only 50% of that audience is actually your target audience, then you would consider your TRP as 50 to calculate your net effective buy.

Some advantages of TRP in advertising are:

1. TRP of a channel help companies target the audience based on the popularity and evaluate their ROI.

2. It enables broadcasting companies to charge higher values from advertisers when there are shows with higher ratings.

Some disadvantages of TRP are:

1. Measuring of TRP includes measuring viewership of selected households out of the total households. Though the households are selected strategically but still it doesn’t take into account millions of households into consideration and hence it does not prove to be a full proof measure of viewership.

2. Higher TRP rating does not necessarily imply the high quality of TV shows. Content providers, in order to earn high TRP ratings, modify the content just to make it more appealing without contributing towards any innovation or relevance. Higher TRP of a channel or a particular programme may prove to be completely irrelevant for higher quality in terms of originality and relevance of the content.

To explain an example of TRP, we use an example of any TV Channel. If an advertiser wants to telecast an advertisement on the channel, he needs to pick a time slot in which he wants his advertisement to be displayed. The prices are different for different time slots which depend on the viewership of the channel at different times of the day. For example, a TV show by the name “Game of Thrones” telecasted on this TV channel is one of the most popular TV shows and enjoys a great TRP. An advertiser needs to pay a hefty amount for his Advertisement to display during this show as compared to other shows which have much lower TRP.

Hence, this concludes the definition of Target Rating Point (TRP) along with its overview.