What is Causal Marketing?

Causal marketing is when an organization is involved with a charitable cause whether directly or indirectly. We tend to see that the primary customers and stakeholders who identify with such causes start identifying with the organisation as well, and this known as causal marketing. It is more like establishing a cause and effect relationship. Causal marketing helps consumers relate to the organization they are attached to in ways which are more like cause and effect relationships.

In today’s age, consumers want to associate with something good. They want all the attributes in relation to them to be associated with good causes too. Therefore, it is an imperative for an organization which wants to relate on a very deep level with its consumers, to practice causal marketing. Causal marketing can be a large range on advertising, activities or campaigns that allow organizations to showcase support for a good cause more specifically a charitable cause. This is the way causal marketing is a win-win situation for the organization. It ensures uplifts brand image, a greater brand recall and an effective impression. Causal marketing or social marketing leads to greater business and also leads to the very pivotal and positive change in society. There is no particular financial gain in all cases of causal marketing but there is a certain positive image and impression left in the minds of the consumers associated with that organization. The gain is of a residual type, doing good and therefore having a better and positive brand image. Causal marketing also fulfils the engagement criterion. We see that nowadays engagement is of paramount importance and leads to greater number of consumers. It not only leads to increased awareness about the organization but a genuine potential for increased sales. It also creates a certain competitive advantage over other competitors, and acts as a differentiator for existing and new customers. An improved brand image and greater brand awareness are complimentary benefits, very important for a new entrant and/or an organization wanting to make a comeback or trying to revive. 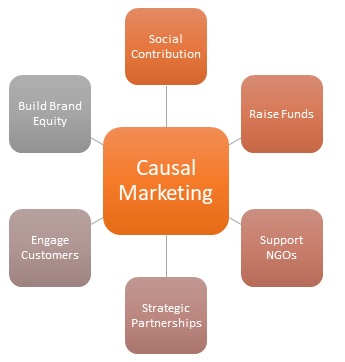 Causal Marketing helps a company to:

1. Social Contribution as a part of CSR

Some advantages of causal marketing are:

1. Strengthening of relationships with customers by widespread awareness due to causal marketing campaigns.

2. Increased sales with time, due to increased consumer engagement.

5. Merger of commercial interests and core competency of the organization

Certain drawbacks of causal marketing are:

2. Causes which aren’t very much known are mostly to have no effect on consumers. It becomes very difficult for them to relate to something they are not aware about. For example a NGO which is not registered in the parent country of the organization is something the consumers of hat organization will not be able to relate or associate with.

3. The association is not merely writing a cheque for the cause, the company needs to be involved using its core competencies, lining the cause with its natural manner. The firm or organization might look cheap and may likely have a damaged image in the minds of the consumers which is the exact opposite outcome of what they are trying to make happen.

We will take an example of the Red Kettle campaign for causal marketing. In this campaign, we see, the Salvation Army Southern territory partnered with DipJar in order to improve the red kettle marketing campaign. The Red kettle campaign earlier was placing red color buckets outside stores or coffee shops to donate funds. But due to the association with Dipjar, Red kettle campaign was taken to a different level where now one could donate with credit cards. The mechanism would to dip the credit cards in a dipjar and donate $1 towards the cause. The Salvation Army saw a gap in their process and filled it with the association with Dipjar. Red kettle Dip jars now placed at the café billing counters and right at the doors of supermarkets and their billing counters. The swiping makes donation effortless and easy. This shows us how an essential gap was filled up with a causal marketing approach.

Hence, this concludes the definition of Causal Marketing along with its overview.