What is High Context Culture? 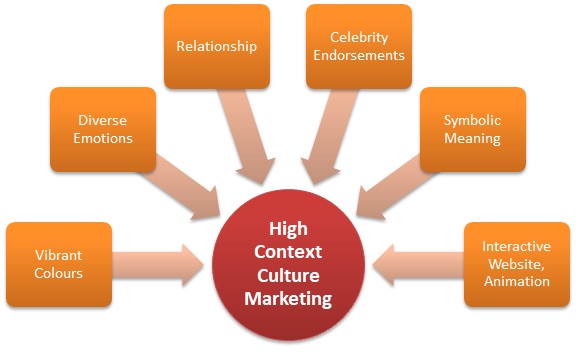 Marketing communication is usually different for high context and low context cultures. In a high context culture, a product is advertised through vibrant visuals with a blend of colors, diverse emotions which portray relationships and symbolic meanings. Endorsements by celebrities are generally more successful too. Package design is also done accordingly with a preference for loud colors. Even business' websites are localized as per high context or low context culture. The websites in Asian countries have heavy use of graphics with minimal texts and are bright and colorful. Websites have animations, graphics, sounds, and varied interactive elements.

1. As the social structure is centralized, the top leader is primarily responsible for maintaining harmony in the group and the advantage is that deals can be made with the person who has authority over the group.

2. Since high context cultures believe in the sense of collectivism, there is a sense of belonging and security. Group cohesiveness is high and individuals are motivated to attain goals working in groups.

3. Accuracy, problem-solving and group learning is encouraged which enhances efficiency.

4. Relationships are personal, long term and based on trust and loyalty which brings about a humane approach while solving conflicts.

1. In high context culture, there is a risk of misunderstanding as communication is mostly nonverbal.

2. Since disagreements are generally personalized and focus is on conflict resolution before progressing the task, there is a risk of neglecting the tasks or not completing them in time in an attempt to resolve conflicts.

3. People respond very slowly to changes which make it difficult to adapt to fast-changing circumstances.

1. The relationship of mother and child in Indian Advertisements like Vicks, Complan, Colgate, Clinic Plus, Dettol and Surf Excel.

2. Storytelling with targeting the emotions of the audience have been used in various ads like Fortune Oil where an old lady requests every day the nurse to feed his grandson who is in hospital. The emotions of the old lady, the nurse, and the grandson when he finally gets to eat the home-made food from his grandmother appealed millions of viewers.

3. Similarly, Birla Sun Life Sun Insurance made a commercial which plays like a short film of 3 minutes showcasing the emotional journey of an autistic kid with his father who has lost his wife and job.

4. IKEA's website in Japan is very different from its American website. In the Japanese website, there is heavy use of graphics and animation and is very bright and colorful with scrolling graphics.

5. In India, about 65% of customers try on new products due to their packaging.

Hence, this concludes the definition of High Context Culture along with its overview.