What is Lagged Effect?

Lagged effect is the is lag or delay which comes in the output for the efforts being put it. Marketing efforts bear their fruits after a lagged effect beyond the time they are done. Sometimes, the efforts lead to a cumulative result and it is due to the lagged effects of marketing. The reason for such thing are the extraneous variables such as history, maturity, mortality, main testing that the test units face.

Lagged effects in terms of sales can be understood by the fact that sales don’t get converted especially new ones, without two or more calls. The cumulative efforts make the sale possible. Various factors such as the marketing mix, marketing communication mix also affect the lag that marketing efforts have.

Marketers need to take into consideration the lagged effect that marketing efforts have. Sometimes, hefty decision making without its consideration can lead to bad decisions. Patience during these periods is utmost important as people don’t just buy a single product all the time and are not always waiting to look for new marketing communications and efforts that companies make. Also lagged effects need to be considered when the company is making marketing efforts during survival of brands as they rely on the prior experience of the marketers on their intuitions regarding the effect and the timeframe involved. Also the company looks on the regular audits to see the lagged effects, but also they need to consider the current marketing efforts that are already in the market before the latest efforts. 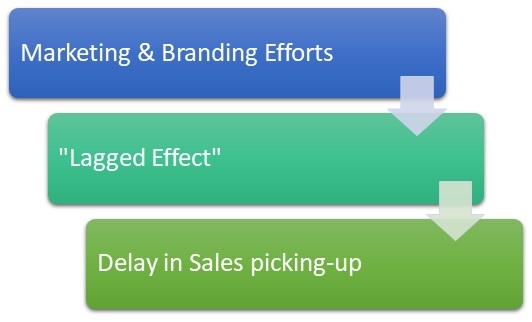 Certain advantages of lagged effect are:

1. It helps marketers build on a concept that takes some time for the customers to understand and adopt.

2. It helps the marketers to change their communication mid-way as the response to the efforts are not that quick.

3. Lagged effect also reflects the human side of marketing which emphasized on the fact that change is not that welcome to customers and people take time to adapt to it.

Drawbacks of lagged effect are:

1. Companies that have a strict budget lose on their efforts as the timeframe associated to some new product and the marketing message with them is large.

2. Companies in survival mode are forced to close operations as the efforts reap their fruits very late due to lagged effects.

3. Sudden changes in the brand image are difficult to achieve because of lagged effect which makes all the previous communications cumulative.

When some brands change their logo, it takes customers to adapt to the change. The stark example is Bajaj. They changed their logo after releasing Pulsar as the logo in itself was outdated and with the new company management they needed a breeze of fresh changes to keep their company afloat. The logo change was one of those steps and the acceptance it got took a lot of advertising as the credibility of brands is associated with its logo.

Hence, this concludes the definition of Lagged Effect along with its overview.