For instance, the competition between an aerospace company and an automobile company for a government manufacturing contract for a military system. 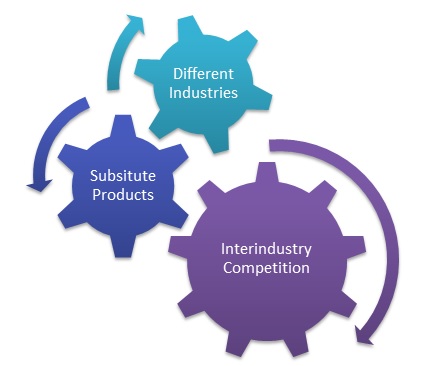 3. Resource similarity also has an effect on awareness. a firm can easily access and understand the consequences of an attack by a rival with more similar resources. Usually, resource similarity is less in case of Interindustry competition.

4. Other awareness drivers are the competitor's reputation and its past competitive behaviour.

5. The motivation to react to any competitive action depends on the future consequences or outcome of that action of the firm.

6. Firms with a higher degree of market dependence will fight vigorously for their firm's position. Again, if market commonality will be high, and firms meet in several markets, the likelihood of attack will be lower but there will be high retaliation.

8. More complex and bureaucratic organisations will take more time for decision making and action implementation which has a detrimental effect on their capability.

2. Another example of Interindustry competition is the declining revenues of voice calls for mobile operators due to the competition posed by social media and enabling technologies like Wi-Fi.

Hence, this concludes the definition of Interindustry Competition along with its overview.