What is Career Stages?

These stages often derive the overall job satisfaction levels of a person throughout the tenue of the job or career.

The 5 stages in a Career

Let us look at the five main career stages for an employee, professional or even an entrepreneur:

A career stage that generally ends in the mid-twenties when one makes transition from formal education to job. We start exploring about different career opportunities. Our decision for career gets influenced by parents, peers and the financial resources.

It is a time when a number of expectations about one’s career are developed, many of which are unrealistic.

This period begins when we start the search of work and also includes accepting the first job, acceptance by peers, learning about the job and gaining the first taste of success or failure in the real world.

A stage marked by:-

1. Continuous improvement in the performance

2. Levelling off in the performance

1. Some employees reach their early goals and go on to even greater heights.

2. Other may suffer from plateaued mid-career

A career stage in which neither the person is learning about their jobs nor they are expected to outdo their level of performance from previous years. It also has two affects on:

1. Individuals who have grown in mid career stage

2. Individuals who have stagnated or deteriorated

This the final stage in one’s career which is usually marked by retirement. This is the difficult stage for everyone but hardest for those who have had continued successes in the earlier stages and then comes the time has come for retirement. 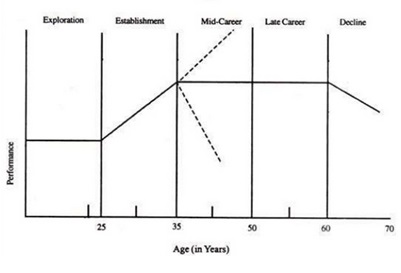 Knowing the career stage for an employee is very important for evaluating a career properly. An average career will show the above stages. The exploration and establishment stages are the most important in defining the career growth in future. If a person is reaching the mid-career stage very early without establishing oneself in the job role then there is an issue which needs to be resolved.

It may be lack of motivation or skill gap. If a person grows even further in mid-career, it is a sign of a good career and vice versa. Most careers would level off and have consistent performance. The career stage would mostly be in sync with job experience and age of the individual.

After spending more years in the marketing department, he got promoted several times and became an important member of the company through the 'mid-career stage' but with no new skills to learn and with change in the consumer behavior and technology landscape, Mike entered the decline stage earlier than expected. He tried improving himself by reskilling and upskilling and kept contributing to the best of capacity till retirement. This is an example of how a person can move through various stages in a career with changing environment and skills.

Hence, this concludes the definition of Career Stages along with its overview.