What is Restrictive Practice?

Restrictive practices are quite prevalent in a business and countries have regulatory authorities to ensure that businesses do not use restrictive practices to not let smaller competitors enter the marketplace. In India it is the Competition Committee of India that enforces the competitions act in India. In organizations also there are a lot of restrictive practices that unions might try to implement. They would try to restrict the productivity of the new workers by creating barriers in terms of equipment, resources, working conditions and opportunities so that the interests of the workers in the union would be protected. The management should try to ensure that this is not the case as both the workers and the organization would suffer and it is the task of the management to align the goals of individuals with the goals of the organization so that both can benefit.

Overmanning and closed shop are two restrictive practices mostly studied in labour relations. Overmanning is giving a specific task to more people than required even when a smaller group can do it safely and effectively. Closed shop is to not let workers be employed if they have not joined a specific trade union or are willing to join it. 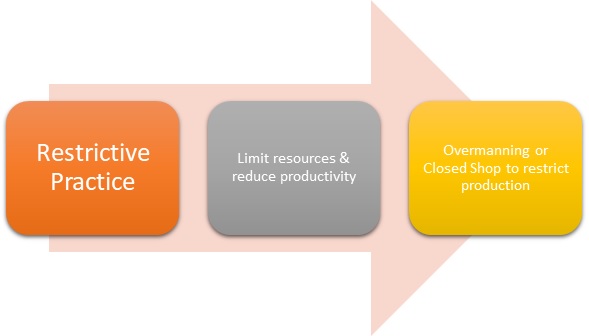 1. Productivity of the organization is affected by restrictive practices

2. Employer branding is affected if news of restrictive practices being followed is leaked out.

3. There can be discontent among the workers

4. Lot of organization politics take place due to restrictive practices

In a manufacturing company XYZ Limited where there was a trade union ABC, this trade union was very powerful and if the management would not listen to the trade union they would quickly strike in the manufacturing plant of the factory and this would result in the organization losing on revenue. ABC had a few restrictive practices like being a closed shop union, if any new worker tried to enter the factory the worker was made to join the union or had to show interest in becoming a member of the union otherwise other factory workers would not allow the new person to work in the factory. The union would also try to get 75 persons employed for a task that is meant for 50 persons so that 25 extra workers can earn extra wages and the union would gain more support as well as from the workers of the factory.

Hence, this concludes the definition of Restrictive Practice along with its overview.