What is Advertising Coverage?

In order to get the greatest return from the investment made in Advertisements for a particular product or brand, it is important to determine the proportion of the target customers who need to see the advertisement. Also, experiencing an Advertisement just once may not be compelling enough to convert a person to a customer. Thus, it is important to make the Advertisement visible a number of times and at a particular frequency to bring the necessary urge towards the product and trigger an urge to experience the product. Advertising Coverage enables determining these two aspects. 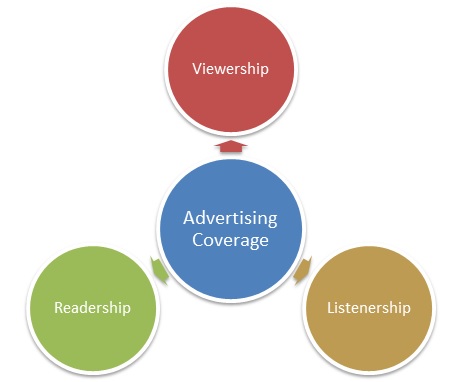 To determine Advertising Coverage, there are various ways. Sometimes, the Advertiser himself identifies this percentage for the company. Or, it can also be determined by establishing a point of diminishing returns. This is the point where the costs of the Advertisement exceed the expected returns from the audience. This is where certain changes need to be done. The change may be the Advertisement itself, the channel used, the frequency of the Advertisement, the graphics and the content used for the Advertisement, etc. The proper planning involves setting the right targets regarding the coverage and frequency in order to avoid wasting money in the wrong message, wrong channel or the wrong time. Advertising coverage plays an important role in deciding how and where to display advertisements. Advertisers sometimes want as many prospective customers as possible to view their advertisements. Thus overall customer reach is an important factor deciding advertising coverage. Advertisers also market the product to specific segment of people in some cases and thus they have to place their advertisements so that target audience should see them. Thus reach of an advertisement to customer according to their needs is also important factor of expected coverage.

Types of Media in Advertising Coverage

2. There is a wide variety of different Advertisement channels available each serving a specific set of purposes and tapping a particular customer segment and can be chosen based on the purpose and the budget of the company.

1. Some channels involve really high investment costs which may or may not give the expected coverage or return and the company may end up making huge losses.

2. To have an effective Advertisement coverage, a lot of factors need to be taken into consideration and coordinated together like the timing, the place, length, graphics, content, etc. which may the entire procedure complex. Not having even one thing right may ruin the entire purpose.

3. Also, a proper frequency of Advertisements to show must be chosen in order to avoid saturation with too much display of the Advertisements.

For example, a Coaching Institute operates in a particular region of the country and plans to advertise its services. For this, the Advertisement channels to be used are local newspapers, pamphlets to be distributed in the local area and a dedicated social media channel. The institute may collaborate with the local book retailers to display their advertisements at their shop. The Institute may choose one or more of the above-mentioned channels for its Advertisements giving it the maximum coverage based on the viewership of the different channels in the region. For this Institute, Advertising in national newspapers and Television Ads will not give it much coverage and it will prove to be a waste of money for it.

Hence, this concludes the definition of Advertising Coverage along with its overview.