What is Living Wage?

Living wages are the least wage or salary that a worker requires to sustain his/her basic needs. Living wages is different from minimum wages, as minimum wages may be less than or more than the living wages in a country. Basic needs are food, clothing and shelter.

An employer is obligated to pay a minimum amount of wage otherwise the employer will have to face the consequences of not paying the minimum wages as mandated by the law.

Living wages is very important to know how much wage needs to be paid so that a worker can fulfill their basic needs.

Ideally organizations should be paying at least the living wages to its workers , it would be good for the organization’s employee brand value and also help to show that the organization cares for its employees and not just see them as revenue generators. 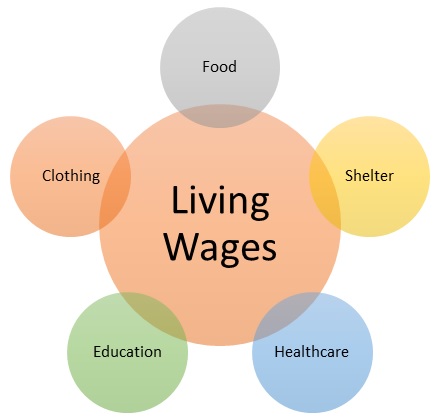 The basic components or elements which are covered as a part of living wages are as follows:

Minimum wages are different from living wages as minimum wages are the minimum amount that an organization has to pay to its employees otherwise they would be penalized as per the law. Living wages are not mandated by the law and is just an indicator for every country that it would take this much amount of money for workers to fulfill their basic needs.

According to Asia floor wages research for the year 2017 the living wage rate is 23588 rupees in India for a month which comes out to about 786 rupees per day for a person to afford the basic necessities and fulfill basic needs. The minimum wage rates according to the Chief Labour Commissioner (central) starts from 373 rupees per day for unskilled workers working above ground to rupees 728 for highly skilled workers working below ground. Clearly we can see that living wages are different from minimum wages and minimum wages are to be paid to the workers by law.

Hence, this concludes the definition of Living Wage along with its overview.