The threat of new entrants in the Burger King Porter Five Forces Analysis can be explained as follows:

For companies like Burger King, who are well-established and founded several decades ago, the threat of new entrants is low.

These quick-service restaurants target the lower- and middle-income groups all over the world as their primary market. Burger King follows the primary generic strategy of cost leadership by economies of scale through standardization of process. For any new entrant, it is difficult to match the prices due to the scale at which Burger King operates and hence it poses a high entry barrier. Further, Burger King and other incumbent players enjoy advantages of location, well-established brand image and robust distribution channels, which poses a significant entry barrier and further reduces any threat of new entrants.

However, there are some factors which work in advantage of potential new entrants. The customer switching costs are none. Also, for starting on a low scale in the industry, the capital requirements are also moderate to low. Hence, these new entrants can prove as a threat in selected regions and affect the sales, but on a global level, such threat is extremely low. 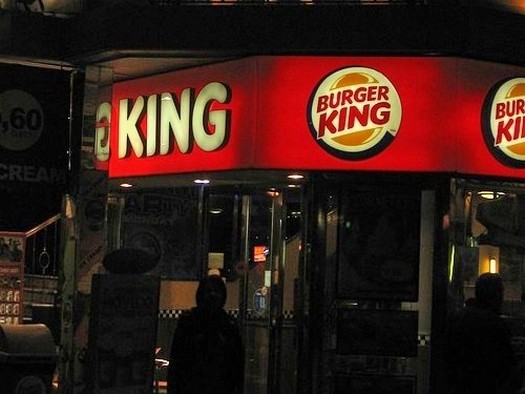 Below are the threats of substitute products of Porter’s Five Forces analysis of Burger King:

For Burger King and other key players in the fast-food industry, there are many potential substitutes.

The substitutes include high end restaurants, local bakeries, and diners. Ready-to-eat food packets available at supermarkets are also a potential substitute. Further, customers can also choose to cook their meals at home. Hence, the existence of a large variety of substitutes acts a strong force.

Further, the customers don’t have to incur any switching costs, if they wish to switch to a substitute, and all these substitutes can cater to the target customer group of Burger King and other fast-food restaurants. Hence, the threat of substitutes is a strong force as per the Porter’s five forces model.

In the Burger King Porter Five Forces Analysis the bargaining power of the customers can be explained as:

With the huge growing market of the fast-food industry, the volume of customers is very high and the order value extremely small as compared to the total revenue of the company. However, in terms of the average customer lifetime value, the customers can have considerable bargaining power since there are a large number of loyal customers who frequent the stores multiple times weekly, and also purchase a wide range of products.

Further, the fast food industry provides products that are largely undifferentiated and many competitors offer products that are of similar nature, ranging from McDonalds and Wendy’s to Starbucks. Since there are no significant switching costs to consumers, they enjoy significant bargaining power. Further, the buyers can also backward integrate, i.e., prepare home-cooked meals for consumption instead of visiting these fast-food restaurants.

Additionally, if we look at the target customer group of Burger King, they are usually low- and medium-income groups, urban and semi-urban households. Since food forms a considerable part of their budget, these consumers are price sensitive.

This further enhances their bargaining power as they can easily switch to competitors and substitutes if prices rise.

Following is the bargaining power of suppliers in the Porter’s Five Forces analysis of Burger King:

Burger King operates in more than 100 countries in the world. It sources all its supplies locally and thus, there is low concentration and large availability of suppliers. This means that the suppliers have low bargaining power. Further, due to the presence of many suppliers and less dependence on any of them, the switching costs are low.

Further, the kind of raw materials needed include buns, vegetables, meat and packing supplies etc. All these materials are largely undifferentiated in nature. The differentiation in the final product is by the standardization of process at the restaurant’s end. Hence, this further allows low bargaining power to the suppliers.

However, the forward integration ability of some suppliers can grant them some bargaining power. Some of the suppliers of raw materials like buns and vegetables are also possible substitutes of the final product burger king offers, and hence they can strengthen themselves.

The impact of key competitors in the Burger King Porter Five Forces Analysis is as follows:

The fast-food industry is projected to grow at a CAGR of around 4.6% and hence, it is in the late growth to early maturity stage. As a result, there is immense focus on market penetration and intense rivalry among competitors for market share. The number of direct and indirect competitors for Burger King is huge. There is competition from similar quick-service restaurants like McDonalds and Wendy’s, and from local bakeries and eateries. All this poses a major threat to competition.

For a large-scale restaurant chain like Burger King and McDonalds, there are large exit barriers of winding up infrastructure and paying off debts, which indicates that even unsuccessful players are forced to stay and eat up into the market share.

Further, considering that the generic strategy followed by many of these key players is cost leadership, the price competition is high. The target customers are price sensitive and can switch easily to a competitor on prices rising.

Also, due to the high perishability of the product, there is an intense threat of competition because of the motivation to cut prices and sell at lower prices.

To conclude, the above Burger King Porter Five Forces Analysis highlights the various elements which impact its competitive environment. This understanding helps to evaluate the various external business factors for any company.