The threat of new entrants in the Lowe's Porter Five Forces Analysis can be explained as follows:

Lowe's is a leading retail chain brand serving millions of customers across geographies. Threat of new entrants is moderate. This industry requires a moderate degree of capital requirements and exit barriers are also high. New entrants can enter in the market especially during infrastructure upswing however establishing the brand reputation or building economies of scale at the level of Lowe’s or other retail brands is difficult. Even though switching cost is low and there's moderate to low level of brand loyalty, entrants find it hard to emulate economies of scale for supply chain and demand side benefits of Lowe’s. Pulling off market presence with large market share and creating a bigger brand to compete with the existing ones is a challenging task. In addition to that, the existing brands collude with one another to create some entry barriers for the new entrants by offering products and services at a very competitive pricing. 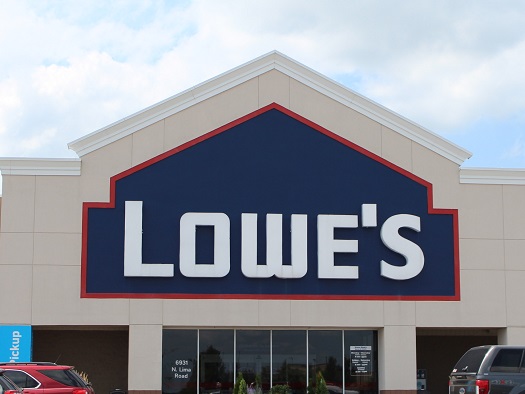 Below are the threats of substitute products of Porter’s Five Forces analysis of Lowe's:

Threat of substitutes is high, since it largely appeals to DIY-ers and DFM-ers who have access to varied alternatives largely available at local stores or retailers like Walmart.

These home improvement products can also be customized and thus can be ordered from local brands without relying on Lowe’s or others. Since the product offerings of Lowe’s and its rival brands are not much differentiated and mostly standardized, the threat of substitutes is high. Substitutes which are cheaper and of better quality can be a threat. To tackle this threat, Lowe’s can focus on economies of scale to offer good quality products at affordable prices. To improve its customer satisfaction, it can provide distinguished services to retain its customer base.

In the Lowe's Porter Five Forces Analysis the bargaining power of the customers can be explained as:

Bargaining power of customers is high. Since switching costs are low, Lowe’s and other players compete with each other to offer differentiated products and services at affordable prices to attract and retain its customer base. The pricing is very competitive and the services offered are also affordable, which reduces their profit margins thereby weakening the bargaining power of these retailers. Customer satisfaction becomes an integral part of this industry which aids in customers/buyers earning more negotiating power.

Although customer’s threat of backward integration is low, customer’s demands of high-quality products with maximization of value for money pushes Lowe’s and Home Depot to focus on providing variety of products with improved customer service.

Following is the bargaining power of suppliers in the Porter’s Five Forces analysis of Lowe's:

Bargaining power of suppliers is low. There are numerous suppliers and only two major players who acquire most of the market, these two retailers enjoy high bargaining power. Switching cost of suppliers is also low and thus Lowe’s and Home Depot easily switch to other alternative vendors globally. Most of the Lowe's suppliers are US based, some of them are based in South Korea, Canada, China, Taiwan etc. Of 7000 vendors and suppliers that it has, the top suppliers are Avery Dennison Corp, Illinois Tool Works Incorporated, Stanley Black and Decker Corp etc. Supplier’s threat of forward integration is low due to capital requirements. In addition, suppliers do not offer differentiated products. Lowe’s maintains a long-term relationship with its suppliers to reduce their bargaining power and this also helps the company strategically in reducing its supplies cost.

The impact of key competitors in the Lowe's Porter Five Forces Analysis is as follows:

Lowe’s operates in the home improvement industry where competition is high. Lowe’s major competitor is Home Depot however there are various other players which include: Best Buy, Sam's club, Target, Costco, Walmart, Ace Hardware, Menards etc. In the home improvement segment, products are largely standardized and undifferentiated. This accounts for even more competition among players. Therefore, there is cutthroat competition among the two to acquire larger market share. The industry is largely fragmented regarding both products and services and there is a continued high industry growth. To compete in this competitive environment, it is now focusing on ‘Total home solution’ with its proposition of strong service component with easy maintenance and installation.

With its offerings of home improvement products with after sales service, it’s focus is on providing customer centric, consumer oriented, omni-channel retail experiences against the value proposition of a competitors’ more industrial geared home improvements by professionals.

To conclude, the above Lowe's Porter Five Forces Analysis highlights the various elements which impact its competitive environment. This understanding helps to evaluate the various external business factors for any company.