The threat of new entrants in the Heinz Porter Five Forces Analysis can be explained as follows:

Heinz is a food-processing company headquartered in Pennsylvania. Heinz is a leading manufacturer and marketer of sauces and condiments in more than 200 countries. A number of factors determine the threat of new entrants in the sauces and condiments industry. The entry barrier posed by the industry is one of the major determinants. The sauces and condiment market is roughly more than 100 billion USD in sales worldwide. For this industry, economies of scale can be a major factor for cost control. Larger and more established companies can control their costs by mass-producing and thus, place themselves in a competitive position. The mechanization and standardization of production processes helps them optimize their operations. As a result, the larger players like Heinz pose an entry barrier to the new players. Further, the incumbent players have well-established brand names and long-term relationships with suppliers and distributors that helps them gain an edge over new players. Newer players might have to face difficulty in setting up distribution channels and fight for shelf-space etc. However, the capital requirements are not huge. Smaller players can enter the market and start operations on a small-scale even with limited upfront capital. The customers face no switching costs which works in the favor of the new entrants. Overall, the entry barriers in this industry are moderate, and so the threat of new entrants are moderate to high for this industry. 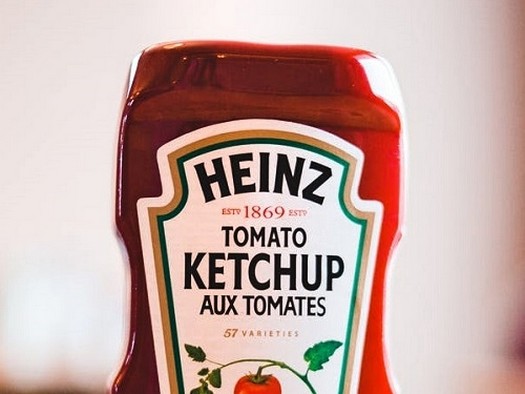 Below are the threats of substitute products of Porter’s Five Forces analysis of Heinz:

There are multiple substitutes for the offerings for the sauces and condiments industry.

With the growing awareness for a healthier lifestyle, customers prefer more healthier alternatives. Sauces are largely complementary foods for breakfast and snacks. As the user consumption pattern for breakfast and snacks change, the demands for sauces and condiments would change. Some of the most common substitutes are dry seasonings and sandwich dressings etc. Further, some consumers might also prefer preparing their own homemade sauces due to the shifts towards organic ingredients. As a result, the substitutes for the offerings of Heinz are readily available with very little or no additional costs. Additionally, the customers face no switching costs if they adopt the products of substitutes or alternatives. So, overall it can be concluded that the threat of substitutes is a strong force for the key players like Heinz in the sauces and condiments industry.

In the Heinz Porter Five Forces Analysis the bargaining power of the customers can be explained as:

Heinz has a broad target customer base. The initial target customers were female shoppers aged between 25 to 55. But now the company has also started to focus on younger shoppers of all genders. The industry enjoys a high volume of customers with a relatively small purchase value per order. For instance, the net sales of Heinz are around $25 billion US Dollars worldwide. In terms of the budget of the customer, the sauces, and condiments do not form a major portion of the budget. The prices would not matter a lot to the customers and many of them would be brand loyal. The customers face no costs in switching to the products of a competitor or a substitute. The products offered are not essentially differentiated. There is also a possibility of customers backward integrating, i.e., producing the sauces and dressings by themselves. All these factors would add to the bargaining power in the hands of the customers.

As a result, the bargaining power of customers is a moderate to strong force for the industry.

Following is the bargaining power of suppliers in the Porter’s Five Forces analysis of Heinz:

Heinz has more than 300 suppliers globally. They are spread across different geographical locations. As a result, the concentration is low. This poses a low threat. Further, the company incurs no additional costs if they want to change the supplier in case, they raise their prices or falter on the demands of the company. The products offered by the suppliers largely includes packaging materials and raw ingredients for the sauce. There are highly undifferentiated and so the company does not have a lot to lose on switching to a new supplier. These are some of the factors that indicate the extremely low bargaining power of the suppliers. Further, even though there is a possibility of suppliers forward-integrating, it would be difficult for them to compete with the well-established players like Heinz. Overall, the bargaining power of suppliers is a weak force in the sauces and condiments industry.

The impact of key competitors in the Heinz Porter Five Forces Analysis is as follows:

The sauces and condiments industry are such that it is moderately fragmented with a large number of smaller players. However, there are a few key players capturing most of the market share. There are many competitors of Heinz like Mondelez, Danone, Nestle group etc. The industry is projected to grow annually. Hence, there is an intense rivalry of market share among the competitors. Further, the products are not differentiated and so, the price competition is high. The customers will prefer to switch to a competitor if the prices rise. There are no switching costs, so the customers can do so without incurring any additional expenses. Further, the products are perishable. For instance, the tomato ketchup produced by Heinz has a shelf life of around 18 months. The company might have to cut down prices to reduce wastage in case they over-produce. There are no major exit barriers which means that unprofitable companies can exit easily, reducing the unnecessary loss of market share.

Overall, the threat of competitors is a strong force in the industry.

To conclude, the above Heinz Porter Five Forces Analysis highlights the various elements which impact its competitive environment. This understanding helps to evaluate the various external business factors for any company.