The threat of new entrants in the HSBC Porter Five Forces Analysis can be explained as follows:

HSBC is a British multinational investment and financial services company which is the second largest bank in Europe and world’s sixth largest bank by total assets and market capitalization. They have ventured into three main business viz. Commercial Banking, Global Banking and Markets, Wealth and Personal Banking. They have an annual revenue of $50 billion USD. Banking is an industry where trust and brand equity is regarded with utmost importance. The established players in the market would have been there for very long period of time and hence they would have garnered enough trust from the customers. This would not be able to be replicated by new entrants quickly. This reduces the threat of new entrants significantly. Besides, there is a huge amount of capital investments in setting up the operations by the new entrants. The products offered should also need to be highly differentiated so that the customers should be allured to choose the new entrant’s product over the existing ones. There will also be a lot of government regulations to be followed in starting the business. But the conditions are bit different for international players who look forward to venture into new geographies. HSBC has to be wary of such players. Overall, threat of new entrants is a moderately weak force when it comes to the operations of HSBC. 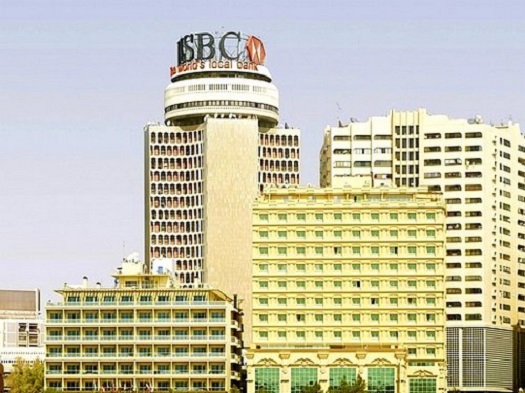 Below are the threats of substitute products of Porter’s Five Forces analysis of HSBC:

The products offered by banks like financial services, investment advice etc. can hardly be replicated. Hence the threat of substitutes is very low. But there have been players normally residing outside the industry who are trying to venture into banking space by providing specialized financial services to the customers. For instance, WhatsApp has initiated WhatsApp pay feature to their customers for enabling seamless interactions between the customers. Besides, there are apple pay for iOS users also. There are also several digital wallet service providers competing for the space largely held by big financial institutions till now. There is also an emerging trend of peer-to-peer lending platforms where people can lend their friends or relatives who are in need without a 3rd party intervention. This increases the threat of substitutes. Thus, the threat of substitutes is a moderate force affecting the operations of HSBC.

In the HSBC Porter Five Forces Analysis the bargaining power of the customers can be explained as:

Whenever small customers defect from a bank to another one, the bank is not going to lose much. But when there is a mass defection due to some trust issues or controversies, it is going to be a problem because the company is losing considerable amount of revenue then. This makes the bargaining power a moderate force. But there is some goodwill associated with the established firms like HSBC, which holds customers back. There can also be some high-net-worth individuals and companies whose partner banks will be established banks like HSBC. This increases the bargaining power of customers because these investments form a major chunk of the bank’s revenue. The banks also face intense competition from other players in providing the best services to the customers. They compete in interest rates, various financial plans etc.

Thus, bargaining power of customers is a moderate force when it comes to affecting the operations of HSBC.

Following is the bargaining power of suppliers in the Porter’s Five Forces analysis of HSBC:

The major suppliers of banking firms are depositors and employees of the firms. The suppliers provide capital and services to the firm respectively. The bargaining power of suppliers are thus a bit high because the bank’s operations are mainly dependent on these revenue streams. The major companies who invest in bulk in the bank will have a higher bargaining power than those who invest smaller amounts. The companies have to strategize their value propositions such that the suppliers are attracted to stay back. They also have to take care of their employees well with attractive salaries and benefits. Besides, there is minimal chance of forward integration by the suppliers i.e., starting banking operations by themselves. There is always some good will associated with established brands like HSBC, which the suppliers would want to associate with. Thus, the bargaining power of suppliers is moderate when it comes to the operations of HSBC.

The impact of key competitors in the HSBC Porter Five Forces Analysis is as follows:

The major competitors of HSBC are Citi Group, Standard Chartered Bank, Deutsche Bank, Bank of America etc. The companies are more or less the same in terms of the products and services they offer. Hence there is intense competition among the companies to grab customer attention. Besides, all these companies cater to the same market which is growing at a slow pace. Thus, it is not possible for the companies to have a clear lead in any of the aspects. Any new practices are easily replicated and there is a deadlock in the market. The companies are trying really hard to come up with means that would differentiate from the competitors which is hardly successful. There is relatively less switching cost and thus customers would choose the best offer provided. The product differentiation is moderate and thus one is not a clear winner over the other.

Thus, competitive rivalry is a strong force when it comes to affecting the operations of HSBC.

To conclude, the above HSBC Porter Five Forces Analysis highlights the various elements which impact its competitive environment. This understanding helps to evaluate the various external business factors for any company.