The threat of new entrants in the Vodafone Porter Five Forces Analysis can be explained as follows:

Vodafone Group Plc is an international telecommunications business with operations across Europe, Asia and Africa. The company offers a variety of mobile services that allow consumers to call, text, and access internet. It also offers fixed-line services like Broadband, television (TV), and telephone. It runs a mobile and fixed network across Europe, as well as providing Internet of Things (IoT) connectivity, security, and insurance services. Vodafone has mobile and fixed networks in about 20 countries and collaborates with mobile networks. The threat of new entrant in this industry is low. Companies who want to enter in this market have to pay huge licensing price to purchase the spectrum band (2G, 3G, 4G and 5G spectrum). Spectrum are allotted using an auction so only companies willing to invest heavily can enter the telecom market. Moreover, there are various government regulation that a firm must comply which makes it difficult for new entrants to enter in this industry. Telecom companies have to invest a lot of capital to setup their Network Infrastructure (towers and other telecom equipment’s). Moreover, the technology is rapidly changing (from 3G to 4G to 5G). Hence, any new player will have to invest heavily to build Network Infrastructure and to get/develop technology. Existing players like Vodafone have a good customer base. Hence, they can generate revenue and can be profitable. But the new entrant will have to spend a lot of time to acquire new customer. Until then the new player will have to bear losses, which can be few years. Existing players are quite aggressive and it’s not easy for a new player to survive. Globally, number of telecom operators in each country is limited and it is difficult for new player to enter. Overall, threat of new entrants is low. 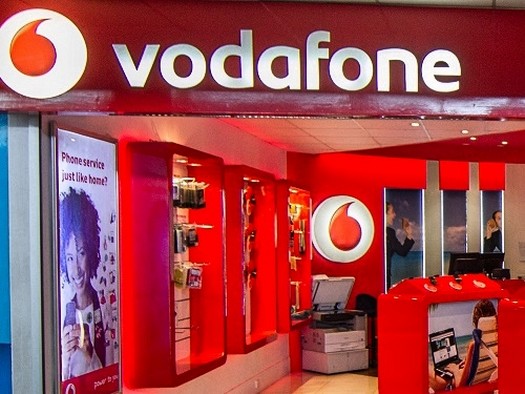 Below are the threats of substitute products of Porter’s Five Forces analysis of Vodafone:

There is very low switching cost for customers/end-users in telecom sector.

People usually jump from one company to another very frequently. With the concept of dual SIM-Cards, most people easily switch to other Vodafone competitors if they are not satisfied with the service. Also, landline, CDMA and 2G products and services are on the decline and broadband service which provide faster, and reliable data and voice are becoming popular. Video conferencing and messaging apps over internet are emerging as substitute to mobile services. Also, new technology of internet accesses through satellite like Star Link projects is providing internet services even in the remote areas where telecom companies can’t reach. This is another substitute which is giving competition to the telecom companies. Overall, the threat of substitute is high.

In the Vodafone Porter Five Forces Analysis the bargaining power of the customers can be explained as:

The bargaining power of Vodafone’s customer is high. Customers can easily switch their telecom operator. Now-a-days, with the help of mobile number portability one can even keep his old number. This makes switching cost for the customer very low. Only a few players are present in telecom sector. Hence, customers don’t have much option to choose from. Customers demand lot of services from telecom operator. They want to purchase best services and pay as low as possible. Hence, they compare prices and services for different operators and switch to the one who offer more value to their customers. All the telecom operator can provide similar product and service. Vodafone does not provide any special product and service. Because of low product differentiation customer can switch to another product easily.

Overall, the bargaining power of customer is high.

Following is the bargaining power of suppliers in the Porter’s Five Forces analysis of Vodafone:

The raw material for telecom technology equipment’s is standardized and is readily available from number of players. Vodafone has easy access to raw material required for their network infrastructure. Hence, bargaining power of supplier is moderate. The telecom equipment’s that these suppliers provide are generally standardized and there is not much differentiation in products from different suppliers. Hence, it is easy for buyer in this industry to switch suppliers. As there are very limited number of buyers in the industry, suppliers don’t have luxury to switch to another buyer. This reduces its bargaining power. Vodafone is working in different countries, it required raw material or other equipment’s in large quantity. Hence, it can ask for lower price. Overall, the bargaining power of suppliers is low.

The impact of key competitors in the Vodafone Porter Five Forces Analysis is as follows:

Competitive rivalry among the existing firms is very high. The telecom industry faces high competition and the rivalry among the firms is very high. Competitors of Vodafone try to provide several features to their customer in a year. The market in most of the countries is saturated and the market size is not growing anymore. Hence, existing player have to compete with each other to retain and gain market share. As there is low switching cost for the customer, all the firms try to attract new user with various one-time offer. Companies have invested in developing the network infrastructure. It was one-time fixed cost. Now, companies Vodafone’s industry wants to lower its operating cost through economies of scale and hence they don’t hesitate to lower their price to gain market share and reduce cost through economies of scale. As all the firms have heavily invested in the industry it is difficult from them to leave the industry. Hence, though there are few players, they are very aggressive.

To conclude, the above Vodafone Porter Five Forces Analysis highlights the various elements which impact its competitive environment. This understanding helps to evaluate the various external business factors for any company.