The threat of new entrants in the Lloyds Bank Porter Five Forces Analysis can be explained as follows:

Lloyds Banking Group is a leading UK based financial services group providing a wide range of banking and financial services, focused on personal and commercial customers. Its operations focus on Foreign Money Center Banks. Newer entrants in financial services space usually redefine the way of doing business by using innovative technologies and offering new-age products. They manage to do so at a highly competitive price, which is facilitated by lesser fixed cost heads. This allows them to come into the consideration set of a customer while making the purchase decisions. However, especially in financial services space, credibility and trust are an important factor driving the decision-making process of the customers. This is because of the critical and capital-intensive nature of the businesses. Secondly, starting a financial services company is a challenging proposition, because of the high investments required, regulatory compliances, and scale of operations. This makes profitability difficult to achieve. Moreover, in some cases, the customer has a positive switching cost, which can only be compensated by cash flow of the bank, resulting in losses. Therefore, we can conclude that threat of new entrant is a medium force affecting Lloyds Bank. 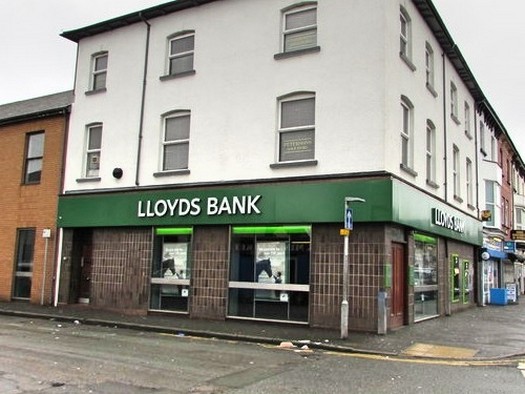 Below are the threats of substitute products of Porter’s Five Forces analysis of Lloyds Bank:

Threat of substitute products is prevalent in an industry where the needs of the customers can be satisfied by varying type of products, sometimes even produced by different types of companies.

In the case of Lloyds Bank, the products offered are retail banking and financial services, which don’t come with easy substitutes. The company is fast evolving, but the disruptions are not caused by external factors. The core of the financial industry remains intact with big institutions like Lloyds Bank, which have marked their presence of decades, if not centuries. Also, the switching cost of the customer is very high, which means they would also like to stick to the products once bought or bank once enrolled to. Therefore, we can conclude that the threat of substitutes is a weak force affecting the competitive strategies for Lloyds Bank.

In the Lloyds Bank Porter Five Forces Analysis the bargaining power of the customers can be explained as:

High bargaining power of customers is not beneficial for companies, as it puts additional pressure on the profitability metrices. For customers, the bargaining power usually evolves from two categories, which are price sensitivity and personalized products. In case of Lloyds Bank, the company has standard product offerings at pre-determined prices, which negates the price negotiations with individual customers. Foe big-ticket customers, the price rates and product personalization exist, but the scale of operations and the amount of money involved makes it a profitable proposition. Additionally, the bank remains unaffected by individual customers and can afford to look at the bigger picture. For customers, the switching cost is high, which keeps them intact to the services offered by the bank.

Therefore, we may conclude that bargaining power of customers is a weak force to analyze the competitive environment of Lloyds Bank.

Following is the bargaining power of suppliers in the Porter’s Five Forces analysis of Lloyds Bank:

The suppliers of the financial services to Lloyds Bank are fairly standardized in their offerings and offer homogenous products. The number of suppliers is plenty, and their dependency on aggregators like Lloyds Bank to reach the end customers is substantially high. Through such companies, the financial services industry acts like a funnel, where the customer gets to choose from all the offerings at a centralized location, emphasizing its importance. These suppliers rely on tapping into the huge customer base of Lloyds bank for market penetration. The switching cost for Lloyds Bank remains fairly low. The suppliers do not have a realistic chance of forward integration to reach the customers directly. However, the suppliers are of immense value because there are no substitute products, and if the suppliers go bust, the bank would shatter along. This is the reason it would have to provide reasonable pricing to these suppliers, which otherwise might come back to the company itself. Hence, we infer that the bargaining power of suppliers is a weak force, but consensus and mutual benefit is essential.

The impact of key competitors in the Lloyds Bank Porter Five Forces Analysis is as follows:

The companies operating in the financial services industry are very few, and the market share is divided among the traditional players. Because of the close-knit nature of the industry, any move to gain strategic advantage by any firm is easily noticeable by other companies, which can adapt their plans accordingly. Some key competitors of Lloyds Bank are Natwest, Barclays, HSBC etc. The industry is growing rapidly, which implies that firms don’t have to compete with each other for market share if they have to grow. The products produced by these banking and financial services companies are highly differentiated, and each company has expertise in certain types of products. This makes the environment conducive for mutual growth. However, these companies compete aggressively to offer the best deals to their customers to attract maximum masses, which hampers overall profitability of each firm.

To conclude, the above Lloyds Bank Porter Five Forces Analysis highlights the various elements which impact its competitive environment. This understanding helps to evaluate the various external business factors for any company.