The threat of new entrants in the Lufthansa Porter Five Forces Analysis can be explained as follows:

Lufthansa is the largest airline in Germany which was started in Berlin, Germany, in the year 1953. It is the second-largest airline in Europe in terms of the number of passengers being carried. Luft is the German word for air and Hansa for the Hanseatic League. For a new entrant in this industry, the capital and resources required are very high. This industry is also highly regulated, so getting all the required licenses could be a difficult task. The product differentiation is pretty moderate in this industry. The fixed costs and the taxes to be paid are also pretty high. At present times, many low-cost budget airlines also have come into the picture, which is the new entrants. Building a distribution channel or network around the world is a tough job. It is also difficult for the airlines to abide by all the policies and regulations of the countries it flies to. Due to high investments of the industry, threat from new entrants is low for Lufthansa. 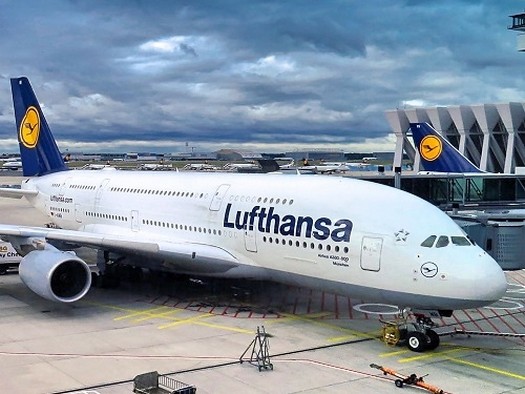 Below are the threats of substitute products of Porter’s Five Forces analysis of Lufthansa:

The airline industry has many substitutes.

If Lufthansa considers only the airline industry, then all its competitors become their substitutes. But if Lufthansa considers itself part of the transport industry, then there are many substitutes that could be used for long-distance travel. Trains could be one such substitute which could be a means of transportation on land for long distances. Though airlines are the fastest mode of transportation, they could be expensive, So to avoid the high costs of airlines, people could go for trains which are much cheaper in nature. For shorter hauls, people could also use other modes of transportation like cars, buses, etc. Another substitute could be local trains which run to shorter locations. People who want to travel to different countries could also travel via ships which though it takes a longer time, would be an enjoyable mode of transportation. Therefore, switching costs in the transportation industry is also moderate.

In the Lufthansa Porter Five Forces Analysis the bargaining power of the customers can be explained as:

Lufthansa has over 100,00 employees worldwide. The airlines industry is a service sector where customer service plays an important role. Since there are many competitors in this industry, the customers can easily switch between the airlines. Most of the customers usually go through all the possible routes and airlines that connect their source to the destination. They compare the prices, previous experiences with the airline, and the quality of service they received and then make a judgement. Therefore, the airlines provide many offers and coupons to reduce the prices. Various discounts for students, the elderly, etc. are also given to improve their sales. Customer service plays a crucial role in this industry. Backward integration by customers is very unlikely in this field, given the high capital and resource requirement. The customers can also influence the price of a ticket on the airline.

When more people purchase the tickets, the prices shoot up, and when there are fewer customers, the prices fall down.

Following is the bargaining power of suppliers in the Porter’s Five Forces analysis of Lufthansa:

Lufthansa has more than 500 subsidiaries and affiliated companies. The main suppliers of this industry are the airplane manufacturers and providers of pilots, air hostesses, engineers, and ground staff. Lufthansa aircraft are made by Airbus and Boeing, which are the largest manufacturers of airplanes. The suppliers are always needed for maintenance purposes. The suppliers in this industry are mostly concentrated. Since the suppliers manufacture such a vital part of the company, it is comparatively easy for the suppliers to get into the airline business. The fleet used by the company is Airbus narrow and widebody and Boeing widebody aircraft. This German company is also composed of Network Airlines, Eurowings, and Aviation Services. The company also has a great network on a global level, reaching destinations in more than 80 countries. They serve around 15 domestic destinations and 200 international destinations, and suppliers in these countries are the air hostesses, pilots, and ground staff.

The impact of key competitors in the Lufthansa Porter Five Forces Analysis is as follows:

The main competitors of Lufthansa are Ryanair Group, Easy Jet and Air France- KLM. Lufthansa is the market leader in Europe, closely followed by Air France- KLM, International Airlines Group and Turkish Airlines. The main competition is from low budget airlines as well as from premium airlines. The products in this sector are highly differentiated and are service based. The switching cost is moderate. The competitors are not only from Europe but also from different parts of the world. Good customer service and openness to customer feedback help in increasing its brand equity. Providing good quality flight meals would also increase its profitability.

To conclude, the above Lufthansa Porter Five Forces Analysis highlights the various elements which impact its competitive environment. This understanding helps to evaluate the various external business factors for any company.