The threat of new entrants in the AT&T Porter Five Forces Analysis can be explained as follows:

AT&T is an American telecommunications company that is the largest in the world and is also the largest provider of mobile telephone services in the United States. This company started in 1983 in Delaware, United States. It provides services in phones and devices, wireless networks, the internet, and television. For the new entrants, huge capital expenditure and resources are required to build a huge network distribution of customers. In this industry, a lot of expenditure takes place in research and development. This is done to innovate new products and services to stay more relevant. The products and services are scalable, which reduces the fixed cost per unit. There is also the threat of getting patents at the earlier stages. Building network towers in strategic positions to provide connections to as many people as possible is a humongous task. Government regulations and policies also need to be followed in this industry. AT&T and other telecom companies need high investment and threat from new entrants is low. 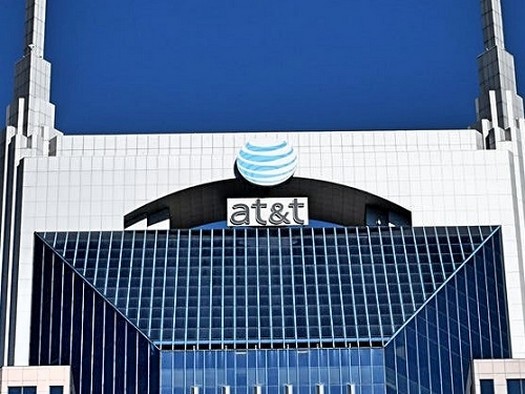 Below are the threats of substitute products of Porter’s Five Forces analysis of AT&T:

The main kind of substitute could be if a telecommunication company comes up with a unique selling proposition that is completely different from the ones existing in the country.

This industry requires the company to be customer-centric ad service-oriented rather than being product-oriented. The cost of switching in this industry is very low. The switching cost would mainly include breaking a contract and an activation fee. If we consider AT&T in the telecommunications industry, then all the existing competitors become a threat to the company. But if we consider AT&T in the communications industry, there are plenty of substitutes for the telecommunications company. Some of them are television, radios, newspapers, etc. Due to the increase in the use of the internet, AT&T has other apps and services like Skype, WhatsApp, and Viber as the new threat of substitutes. But today the number of users of television, radio is comparatively less, and people are mostly using phones and the internet as the main mode of communication. For internet and telephony, there is no alternative, and threat from substitutes is low.

In the AT&T Porter Five Forces Analysis the bargaining power of the customers can be explained as:

AT&T has a huge customer base of approximately 70 million postpaid and 15 million prepaid customers. Customers mostly want the best service at the lowest possible prices available in the market. New innovations are extremely important to stay relevant and hold the market share. Customers can be enticed by providing various offerings and discounts. The services could be bundled up to increase the customer base. It is always important to increase the customer base to reduce the bargaining power of the customers. The prices have to be always revised at a shorter time to match the existing competitors. If the customer is already in a contract, the cost of switching would be high as they would have to pay a hefty amount to break the deal. But if they are out of contract, then the switching cost drastically decreases. Initially, when AT&T started out, the industry was a monopoly, but over the tie, new players have entered the market, and the company lost its market share.

So, it is extremely important to maintain its market leadership.

Following is the bargaining power of suppliers in the Porter’s Five Forces analysis of AT&T:

AT&T has a supply chain that consists of more than 5000 suppliers. The company also selects a group of seven suppliers with the best supplier award. This is done as an impetus to acknowledge suppliers who provided stellar services, exceptional products, better cost structures, and innovative methods. By doing so, the company can ensure an efficient supply chain. The construction of wire lines, copper wires, etc., is needed from the suppliers. The company also went into a partnership with Apple as being the exclusive telecommunication carrier for Apple. The brand has a 10% share in the sales of the device, and Apple has a 10% share in the charges raised by AT&T from the customers. Since the company has great brand equity, this helps them in getting suppliers who are loyal to the company and provide uniform, quality products. AT&T also has two equipment suppliers – Alcatel- Lucent, and Ericsson.

The impact of key competitors in the AT&T Porter Five Forces Analysis is as follows:

AT&T has many competitors like Verizon, Xfinity, Spectrum, etc. AT&T has the highest annual revenue followed by Verizon, Xfinity and Spectrum. The company is the largest telecommunications company in the world, with a market share of more than 40% in the United States. Though the telecommunications industry is saturated, the rivalry in this industry is pretty intense. AT&T has to continuously revise its strategies to retain the existing customers and to bring in new customers. There have been many mergers and acquisitions in this sector as the market is saturated, with around 90% of the population already owning a mobile phone, but the rivalry is intense. The products and services have to be differentiated and of high quality to remain in the industry and to provide the customers with a unique selling proposition.

Since there are several players competing from the space, competitive rivalry is high.

To conclude, the above AT&T Porter Five Forces Analysis highlights the various elements which impact its competitive environment. This understanding helps to evaluate the various external business factors for any company.