What is Cognitive Test?

Importance of Cognitive Tests in Business

These are widely used in many areas from admissions into prestigious colleges to a role in the organization. Cognitive tests range from testing an individual’s verbal, psychometric, numerical abilities etc. It is widely used by organizations to see that other than the hard skills an individual should even have the mental abilities that are required to perform the tasks that the job entails. These are also designed for measuring if a person suffers from Alzheimer’s disease or not. Cognitive ability testing is a common selection method used to test the knowledge & capabilities of a person. Cognitive tests are used to test various mental abilities like memory, ability to learn and process information. These tests are widely accepted across various sectors and sometimes hiring is done solely on the basis of cognitive tests. These can be administered in various ways example pen and paper method or computer-based method. It is also a great method as well as a cost-effective method to quickly sort through the applicants when the applicant pool is large. 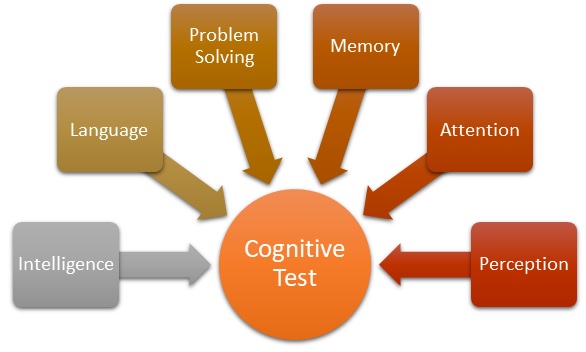 The factors which are tested through such cognitive tests are:

Some of the popular cognitive tests are:

7. Sally–Anne test (The ability to attribute false beliefs to others).

Some advantages of cognitive tests are:

1. They are widely accepted and a standardized way of testing cognitive abilities.

3. These tests are highly reliable

1. People from the same background or experiences may tend to do better than others leading to lack of diversity.

2. Tests do not account for some ability differences between genders and may result in the tests favoring one of the genders

These tests are of many types checking various cognitive abilities of individuals they are standardized and widely accepted. Some of the types of tests are mirror test (to test self awareness), T maze test (to test learning ability), Sally–Anne test (The ability to attribute false beliefs to others). These are some of the many cognitive tests that are there to test various aspects like memory, working memory, long term memory, short term memory, intelligence tests and situational judgement tests are there to test the various aspects of cognitive abilities of humans and animals.

Hence, this concludes the definition of Cognitive Test along with its overview.