The threat of new entrants in the Kellogg’s Porter Five Forces Analysis can be explained as follows:

Threat of new entrants is moderate in the processed and packaged food industry. Kellogg’s faces a moderate level of threat, as the switching cost of customers is low. Customers can easily switch to better alternatives which bring new innovative products and offer unique value propositions at affordable prices. Capital investment is moderate, which encourages new entrants to invest on their R&D and marketing to compete with the established brands. However, Kellogg’s and other established brands have advantage of economies of scale that helps them in cutting the cost, thereby deterring the new entrants. Kellogg’s also has demand side benefits of scale and customer loyalty which new entrants find difficult to imitate. Government regulations on packaged food is also one of the entry barriers, however by innovating with the products and establishing distribution networks (which is easier to achieve), there are fair chances for new brands to enter the market and compete. Kellogg’s can deal with this threat by differentiating its products and focusing on product development capabilities to tap into consumer desire. 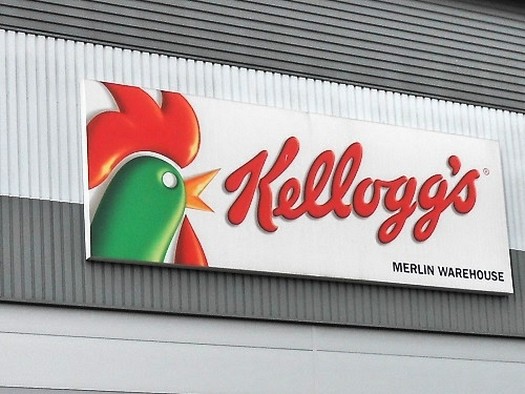 Below are the threats of substitute products of Porter’s Five Forces analysis of Kellogg’s:

There is a moderate threat of substitutes.

Consumers are substituting ready to eat cereals with health bars like canola bars etc., toaster pastries, health drinks like smoothies, juices etc. Health-conscious consumers find ready to eat cereals less healthy and are switching to these substitutes. Since the switching cost for customers is low, consumers are moving more towards healthier options. Adding onto that, busy and mobile lifestyle has invigorated the need for mobile breakfast alternatives rather than traditional sit-down breakfast (usually cereals), which further pose a threat to the company’s business. Thus, Kellogg’s faces significant threat from its substitutes and needs to address this by working on brand loyalty and improving the quality and maximizing value for money. It needs to focus on customers and implement retention strategies with innovation in R&D to compete with the substitutes and attract and retain its customer base.

In the Kellogg’s Porter Five Forces Analysis the bargaining power of the customers can be explained as:

Bargaining power of customers is low. They do not directly influence in cutting the cost, but there’s indirect influence due to the other competitors which give customers the choice to choose, thereby making the industry cost competitive. Switching cost for customers is low which poses a threat but Kellogg’s offer slightly differentiated quality products which help them retain their customer base. Kellogg’s focuses on launching new products and innovating to improve customer experience. This helps Kellogg’s in building a larger customer base that helps the company in earning more bargaining power. With introduction of new products and product diversification, a company can reduce the defection of existing customers to its competitors and can attract more negotiating power. There isn't a customer's threat of backward integration. Due to intense competition, Kellogg’s not only has to innovate with its product categories but also has to offer discounts and offers to attract its customer base.

They invest in market research to understand customer needs and deliver them at affordable prices which gives customers some limited bargaining power.

Following is the bargaining power of suppliers in the Porter’s Five Forces analysis of Kellogg’s:

Bargaining power of suppliers is low in the processed and packaged industry because of the high concentration of suppliers. Due to low differentiated raw materials offerings by the majority of suppliers, Kellogg’s and various players have an edge since they can easily switch from one supplier to another. Switching cost is also low for the companies which gives them more power to negotiate and increase their profitability by reducing the cost of supplies. If suppliers are in a dominant position, it could reduce the margins of the companies and therefore to address this threat, Kellogg’s maintains close ties with its suppliers. It creates interdependency so that suppliers do not switch easily. Apart from that, it also maintains an extensive supply chain network and innovates with its product with different raw materials to reduce the dependency on particular raw material supplies. There’s less threat of supplier’s forward integration due to capital requirements in R&D.

The impact of key competitors in the Kellogg’s Porter Five Forces Analysis is as follows:

Kellogg’s major competitors are General Mills, Mondelez International, Kraft Heinz, Nestle, ConAgra Foods etc. Entry barriers are low which makes competition even more intense. Industry growth is high due to which Kellogg’s rivals maintain a cutthroat competitive market. Kellogg’s stays competitive in the market by offering differentiated products at cheaper prices by leveraging economies of scale. Kellogg’s outperforms its cereal competitors in overseas markets by a wide margin. Nearly 70% of its revenues are generated from the US, Europe and Latin American markets. Kellogg’s business strategy of differentiation and cost leadership with its focus on constant market research to remain sustainable helps drive larger market share. To address constant intense c competition, Kellogg’s can also focus on collaborating with its rivals to increase market size rather than competing in smaller markets.

Establishing strong customer loyalty and product development capabilities with extensive distribution channels will aid Kellogg’s in competing with its rivals and attaining the competitive edge.

To conclude, the above Kellogg’s Porter Five Forces Analysis highlights the various elements which impact its competitive environment. This understanding helps to evaluate the various external business factors for any company.