The threat of new entrants in the Uber Porter Five Forces Analysis can be explained as follows:

The business model of Uber is replicable. Any player with sufficient capital can comply with the regulatory guidelines and create a ride-hailing service, reducing the barriers to entry. As individual cabs are operating, the economy of scale only needs to be achieved in backend operations. Profitability, however, is difficult to achieve, especially in the initial years, as more cash would be burnt in forms of investment. The switching cost too remains minimal, as users would be keen on securing the best deal for their trip. However, two factors play a major role in the market dominance of Uber. The huge network of cab drivers incentivizes the customers to use Uber rather than any new service provider, which in turn inspires more drivers to join hands with the company. This loop of cause and effect provides Uber with exponential growth over time and is difficult for any new entrant to even initiate. Secondly, the brand equity of Uber is very high in the regions of presence, making it a reliable and go-to option for anybody considering a commute. Therefore, the threat of new entrants is a moderate force affecting the competitive landscape of Uber. 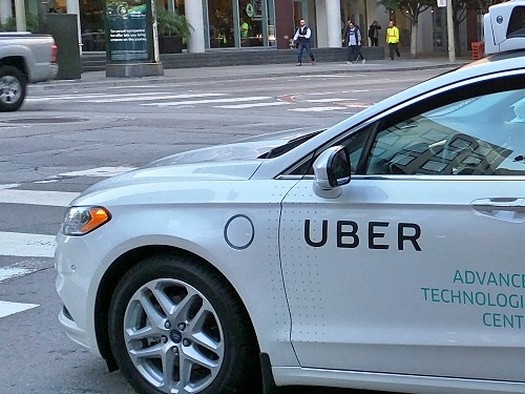 Below are the threats of substitute products of Porter’s Five Forces analysis of Uber:

Uber is primarily a cab-hailing service provider, which enables riders to connect with available drivers in a convenient and timely manner.

A cab-hailing service can be substituted by public transport like metros, rails, buses, and tramps. It must be noted that government spending on infrastructural development is at an all-time high in several countries across the globe, as a measure of economic recovery post the coronavirus pandemic. Thus, in the coming years, we would see better public commutes available even in developing nations, all set to reduce the need for cabs. Also, there has been a massive shift towards vehicle ownership after the pandemic, as people are uncomfortable using cabs. Even the second-hand vehicle market is booming worldwide, which is an indicator of first-time ownership or multiple-vehicle ownership, thus eliminating the need for a service like Uber. However, over the long run, the trends are expected to normalize, and with a recovered need to travel and disproportionate costs of driving personal vehicles, people might stick to commuting by cabs. Hence, we perceive the force of potential substitutes to be moderate.

In the Uber Porter Five Forces Analysis the bargaining power of the customers can be explained as:

Customers of Uber can be divided into two categories- price conscious customers and quality conscious customers. While the quality conscious bunch would prefer reliability, prompt availability and consistency of the service, price conscious customers always seek for the best deals across different aggregator platforms. This is facilitated by a low switching cost. The service once begins is largely undifferentiated and can be matched by any company who invests in proper training of drivers. However, network effect doesn’t allow many options to the customer either, and thus they have to fall back onto Uber or other popular platforms. They don’t have bargaining leverage and can be charged premium depending on their travel time, location, and history of payment. Data analytics is utilized by the company to pitch an optimum price to the customer.

Since travel is an inelastic need, the bargaining power of customers becomes a weak force in the consideration of the competitive ecosystem.

Following is the bargaining power of suppliers in the Porter’s Five Forces analysis of Uber:

The suppliers of the service are the cab drivers who are connected to the seekers of the service via platform, for a percentage of the total revenue they generate from the ride. Around the world, the bargaining power of these drivers has been on the rise, as they unionize to reach consensus and pressurize the company to alter the practices. These demands include reducing the fee that the platform charges, and supporting the drivers by providing stable income, medical insurance, and other employment benefits. While Uber continues to maintain its position that the drivers are contract-based employees, judiciaries have thought overwise, tightening the regulatory pressure on the company. Hence, the bargaining power of the suppliers i.e., the drivers has increased in strength and is expected to massively impact the business model and operations of the company in the coming years.

The impact of key competitors in the Uber Porter Five Forces Analysis is as follows:

With a presence in more than 80 countries of the world, Uber has facilitated more than 5 billion rides worldwide. Uber faces stiff competition from players in each market, who have a very similar business model and operating scale. These players have been able to create a similar network of riders, most of which are partners with multiple companies. The ride service and customer experience, as well as the pricing is comparable and hence competitive. Rivals like Lyft, Curb, Didi Chuxing, Grab, Ola are giving tough competition to Uber in terms of market share and operating profit margins. Penetrating Asian markets like China is complex, given regulatory pressure and established cab-hailing services like Didi. Therefore, competitive rivalry is a strong force affecting the company. Uber however is not poised to back off, as the division of the pie is presently accompanied by the increase in the size of the pie given rapid expansion across different geographic locations.

In future when the market development would saturate, the battle between the companies is likely to be based on under-cutting each other’s price, and thus would result in diminished profits and low growth.

To conclude, the above Uber Porter Five Forces Analysis highlights the various elements which impact its competitive environment. This understanding helps to evaluate the various external business factors for any company.