The threat of new entrants in the GAP Porter Five Forces Analysis can be explained as follows:

GAP, which started as a retail outlet for other brands and eventually started selling its own label, has been around for several 5 decades. Apparel industry is one of the most dynamic industries to operate in, because of ever evolving trends and innovative products launched by newer companies. The barriers to entry are low, as the manufacturing is mostly outsourced to factories producing multiple brands under the same roof. Any new entrant can secure the product to sell. However, marketing and distribution requires high level of capital and expertise. The selling of products has recently become easier than ever, with the advent of eCommerce and D2C business models. Influencers are often incentivized to promote these brands, ensuring that the message gets delivered to millions of people across the globe. GAP being an age-old brand, there can easily be a case where people relate to a newer brand better and prefer it over GAP. Therefore, we analyze that the threat from new entrants is a strong force for GAP to navigate. 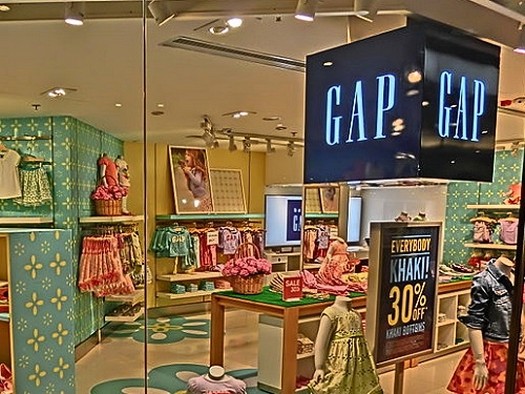 Below are the threats of substitute products of Porter’s Five Forces analysis of GAP:

Clothing is a basic need and cannot be substituted.

However, there can arise new trends of newer clothing styles which are not presently produced by the company. Here, because of the dynamic nature of the industry, we assume that any such trend could be easily replicated by the company, and hence we can conclude that the threat of substitutes is a weak force to affect the competitive landscape of the company. Other apparel which can substitute the mainstream are designs which are locally inspired and produced at a much smaller scale, and hence their threat too remains minimal in toppling the stature of GAP.

In the GAP Porter Five Forces Analysis the bargaining power of the customers can be explained as:

GAP has a smaller and loyal customer base. The primary growth drivers of the company presently are other labels, including the Old Navy. While the breadth of this customer base is growing as the company expands to different geographies and the purchasing power of customers increases around the world, the depth of loyalty in the apparel industry has been decreasing overall, and GAP is no foreign to this transformation. The switching cost of customers is minimal, and the availability of alternatives has become increasingly easy, especially after the gain in popularity of e-Commerce. Since the customer base is rather concise, any decision by the company can influence a significant proportion of customers. The company changed their logo in 2010, and after severe backlash from the customers, the company reverted to its 20-year logo within the span of a week. This itself is testimonial of how strong the bargaining power of the customers is.

Similarly, any pricing change can also attract an offset from the GAP Community, hindering the brand value and sales of the company.

Following is the bargaining power of suppliers in the Porter’s Five Forces analysis of GAP:

Apparel industry works on a standard model of having contractual relationships with factories which produce the products for them. This structure also applies to GAP, which has around 1000 suppliers based out of 40 different countries. This diversified chain of suppliers enables the company to dodge any regional disruptions and run the distribution network in a streamlined manner. Also, it must be noted that because of high volumes, GAP forms a significant portion of the produce of these individual suppliers. This further increases the bargaining power GAP can exert over its suppliers, thereby making the force of their threat minimal in nature. The contractual nature of the relationship sets prices constant for a year or more, which ensures protection from fluctuations in the raw material market and inflation. The unionism within the workers of the supplier factories is a threat, but GAP is not liable to deal with it directly. But because all the factories are strategically located in different countries and are run independently, there is only a skew chance of these hauls passing on from one location to another.

The impact of key competitors in the GAP Porter Five Forces Analysis is as follows:

The competition in apparel industry is immense, with the brand competing from players like Abercrombie & Fitch, American Eagle Outfitters J. C. Penney, J.Crew Group etc. Despite being present in the American market for more than 5 decades, the company holds less than 5% market share in the country. The switching cost for the customers is very low, which allows them to experiment with different brands and look for the best deals and experiences. A hefty portion of customer’s willingness to pay comes from the label they are purchasing and how well they can resonate their lifestyle with what the brand stands for. Providing this premium experience is not easy for local brands, which are therefore not direct competitors of GAP. However, different semi-premium to premium brands offers similar experiences, pushing the company to continuously augment its offerings and experiment with newer things.

Overall, we can conclude that competitive rivalry is a strong force which defines the competitive environment of GAP.

To conclude, the above GAP Porter Five Forces Analysis highlights the various elements which impact its competitive environment. This understanding helps to evaluate the various external business factors for any company.