The threat of new entrants in the Tesla Porter Five Forces Analysis can be explained as follows:

Tesla is one of the leading manufacturers of plug-in electric vehicles in the world and has been doing really well. For any potential new entrant in the market, the automobile industry poses major entry barriers. There are several factors to this. Companies like Tesla, BMW etc. can turn the economies of scale in their favor by producing millions of units every year and achieving high profitability. Further, Tesla has developed their brand image with their advertising efforts and popularity of CEO Elon Musk, along with positive customer sentiments across the years.

Further, the capital requirements for establishing and maintaining an automotive company are huge. This includes the setting up of infrastructure and establishing the supply chain and marketing channels. Also, for large investments like automobiles, it is not easy for customers to switch to another company’s offerings. Even though, there is no targeted retaliation against new entrants from the incumbents, the incumbents can always offer better price due to large scale production. All these factors pose a major entry barrier to new players, and hence the threat of new entrants is a weak force. 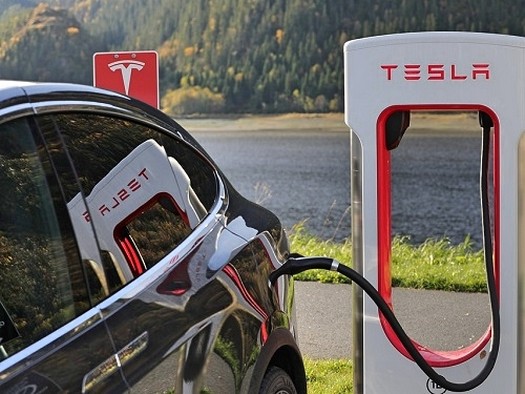 Below are the threats of substitute products of Porter’s Five Forces analysis of Tesla:

There are a lot of possible substitutes for the offerings of Tesla.

Tesla targets upper-middle class as well as upper-class individuals as their primary customer segment. On a narrower level, the regular petrol or diesel vehicles are cheaper and more common types of automobile offerings available. More broadly, public transport is also a possible substitute for the electric vehicle industry. Although, it won’t cater to the same target market segment and hence is not a true substitute. There are a lot of luxury automobiles available which caters to the same target segment.

Further, the customers do not face any major switching costs in switching to substitutes for their transportation needs. In the long term, even though electric vehicles are more cost-effective, the charging infrastructure is still to be developed in many countries and hence customers can shift to substitutes. Hence, overall the threat of substitutes is a strong force for the electric vehicle industry and Tesla in particular.

In the Tesla Porter Five Forces Analysis the bargaining power of the customers can be explained as:

The size of purchase of an automobile forms a large chunk of the budget of the consumers, so they can be price sensitive to some extent. However, the target group is middle- and upper-class individuals and owning a Tesla also serves an element of social status. All these factors provide low bargaining power to the customers.

Further, Tesla offers highly differentiated products and has built a brand name for itself in the automobile industry over the years. They spent roughly 1500 million USD in 2020 on their research and development activity. These factors provide them an edge over their competitors. There is no possibility of backward integration, which means customers cannot produce their own products by integrating with the company’s suppliers. However, the customers incur no switching costs in shifting to a competitor which can provide them some power.

Overall, the bargaining power of customers is a moderate to weak force in the automobile, especially the electric vehicle industry.

Following is the bargaining power of suppliers in the Porter’s Five Forces analysis of Tesla:

Tesla sources its supplies from hundreds of different suppliers from different regions of the world. For example, the windshields are sourced from ACG automotive, brakes from Brembo, instrument panel from Inteva Products etc. Additionally, they are constantly in talks with new suppliers to reduce dependence on any single one. This means that the concentration of suppliers is low. The availability is, however, limited due to the differentiated nature of the products that Tesla purchases from them. This provides moderate level of bargaining power to the suppliers. There are no major switching costs for Tesla in changing the suppliers. However, it might delay production in setting up the contract and the channels which can add to the suppliers’ bargaining power. The possibility of forward integration for the suppliers is low because of the intensive capital requirements in setting up production. So overall, the bargaining power of suppliers is moderate to low.

The impact of key competitors in the Tesla Porter Five Forces Analysis is as follows:

The electric vehicle industry is growing rapidly worldwide with a projected CAGR of nearly 30%. All this makes the electric vehicle industry a very competitive one. There are few but very large competitors worldwide. Tesla enjoys a market share of 14.55% in the global plug-in electric vehicle market. The major competitors are VW Group and GM with a market share of 12.52% and 8.55% respectively. Since the industry is far from its maturity and rapidly growing, there is scope for these larger key players to coexist. So, the competitive rivalry can be thought of being moderate at best.

Further, the industry poses high exit barriers for companies due to the high capital requirements in setting up the infrastructure and distribution channels. The price competition is not intense since different players of the industry can target different income groups and exist simultaneously in the market.

So, overall the competitive rivalry is a moderate to weak force as per the Porter’s model.

To conclude, the above Tesla Porter Five Forces Analysis highlights the various elements which impact its competitive environment. This understanding helps to evaluate the various external business factors for any company.