The political factors in the Tesla PESTLE Analysis can be explained as follows:

Tesla has a global outreach, spread across various countries and jurisdictions, and it continues to expand and optimize its retail, service and Supercharger capabilities across the globe. As a result, they are subject to a variety of legal, political and regulatory requirements as well as various social and economic conditions over which they have minimal control. The Tesla company may be impacted by various trade policies, that are native to a particular region. These political views may also be impacted by the population rescinding in that region, as well as the leadership of the government in that region. Political uncertainty and changing economic cycles have a significant effect on their operations. Several risks associated with international business activities leads to an increase in costs, which ultimately impacts its ability to sell its products. These issues require constant attention from the management. There are certain requirements that Tesla company needs to comply with, including certain international regulation and safety requirements for all its automobiles as well as charging stations and other electric infrastructures. Various other factors that affect the sale of the company are changes in the foreign government taxes, regulations and permit requirements for import as well as export, trade restrictions, customs regulations, tariffs and price and preferences of foreign nations for domestically manufactured products. 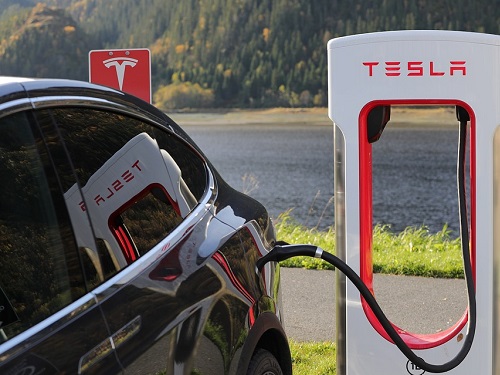 Below are the economic factors in the PESTLE Analysis of Tesla:

The effect of changes in other external factors leads to changes in economic conditions.

Cars are considered as luxury goods in major developing countries and have to be priced accordingly to capture major markets in these countries. Currently, Tesla cars in these developing regions are considered expensive and even though one wishes to buy a Tesla, the need for charging stations is not completely satisfied. With the government promoting the sale of the vehicle, by providing incentives, is a plus point for the company. It can design and modify cars according to the needs of the consumers in different regions, with keeping affordability in picture along with government incentives. Renewable energy is a much-debated topic across the world. With these cars, Tesla has a great opportunity of launching it into markets where the need to shift to more sustainable sources of energy is a must. For Tesla, to reduce the cost of the car, the company needs to work on reducing the cost of its engine, thus reducing the overall cost of the car. The major task for the company right now is to convince its customers that, it will be in business for the long run and only when that is achieved, Tesla will be able to satisfy the needs of the society as a whole. With overall economic activity increased after the recession period, and increased sales of SUV, Tesla stands a good chance of increasing its year on year sales exponentially is the prices paid are in line with the brand value.

With the world moving towards a more ‘Sustainable societies’ people wish to make their contributions towards reducing the carbon footprint. Thus, the idea of an electric car sound more promising in the long run. These cars are less expensive in terms of fuel consumed and maintenance as compared to conventional cars. Social factors also take into account the need for maintaining individual status. By making cars better looking and better performing than conventional cars, Tesla can capture a larger segment of consumers, who are willing to pay good amounts of money for status as service and brand value. By changing continuously with the trends and adapting to the needs of the people, Tesla has made a positive mark in the fields of electric vehicles. With an already established image in the minds of the people, Tesla has an edge over the other competitors. With further intimation by the UN to include more of electric vehicle fleet into developing countries, Tesla has a good opportunity to serve the market and thus increase its profitability.

The technological factors in the PESTLE Analysis of Tesla are mentioned below:

There is constant innovation in technology and Tesla has been pioneering various tech advancements in the market. A recent example is the ‘smart summon’ software that the company has released on a trial basis. This software can be employed in all cars that have full self-driving capability or enhanced autopilot. This technology goes beyond just moving the vehicle forward and backward. It actually can be set to reach you from the parking lot, but only if it is within sight. Though technology seems perfectly advanced and interesting, the company can work on making improvements to reduce the restriction of being in sight of the car. Another interesting feature that Tesla has brought out is Netflix and caroke, the caroke is a tool that will bring a package of songs and lyrics in multiple languages to the car's central console. Certain models of automobile from the company will be able to connect to Netflix, Hulu and YouTube accounts and connect them to the central console as long as the vehicle is parked. iQiyi and Tencent Video will be introduced for the Chinese customers.

With taking care of the customer needs, Tesla further promises to expand the streaming sites as well as improve and create newer and efficient technology.

Following are the legal factors in the Tesla PESTLE Analysis:

Tesla has managed to capture a significant area of the market, given the short period. With the thought of providing better service to customers worldwide, Tesla wishes to expand in other countries. To do so, Tesla needs to stay updated with all the international patents and copyrights existing in the region it is willing to enter. Certain countries do not allow for direct selling, in which case Tesla will have to undertake a task forming a chain of suppliers, which includes various dealers. Tesla needs to follow the various labor laws and act accordingly. A recent example where Tesla violated the labor laws, by threatening the labors when they tried to form unions. There are certain laws related to manufacturing that the company needs to follow. In case any of these are violated, the costs associated with compliance will be huge. The removal of any sort of contamination in the system and any changes to the operations mandated by new or amended laws may be significant.

In the Tesla PESTLE Analysis, the environmental elements affecting its business are as below:

The world is moving towards a more sustainable future. Given this fact, people are willing to buy an electric vehicle, to save on the added expenses of a conventional vehicle, and to do their part in saving the environment. Tesla aims at reducing the greenhouse gas emissions, by curbing the two major producers of GHG’s i.e. production of electricity and transportation. With sales so far, Tesla has achieved to reduce emissions over 4 metric tonnes. As of February Tesla, has installed 3.5 Gigawatts of solar cells that produce approximately 13 terawatts of clean, emission-free electricity. This can be used for Tesla’s supercharging stations. Tesla has also produced the largest lithium-ion battery in South Australia.

This has helped produce large scale zero-emission electricity, which has been used by cities for their daily use. Based on the recent technological advancement, the chances of Tesla continuing to contribute to the environment and society are quite high. With continuous efforts, Tesla will be able to leave a mark on save the planet leader board.

To conclude, the above Tesla PESTLE Analysis highlights the various elements which impact its business performance. This understanding helps to evaluate the criticality of external business factors for any brand.