The threat of new entrants in the 7-Eleven Porter Five Forces Analysis can be explained as follows:

7-eleven offers food and beverages from different brands like Hershey’s, Snickers etc. and produces food and beverages under its own labels like 7-select, Slurpees etc. For a new entrant in the market, we can look at few factors that can pose entry barriers. The bigger players in the market operate on a large scale and thus can achieve highly competitive pricing by tipping the economies of scale in their favor. Further, these companies follow cost leadership strategy and thus target middle- and low-income groups as their primary customer segment. The customers face no switching costs and can easily switch to a competitor in case of price rise, except for loss in case of loyalty programs being offered by the companies.

Further, for starting out on in the convenience retail industry, the capital requirements can be variable. Companies can start on a low scale with few stores and concentrated in small locations. However, the capital requirements increase as the scale of operations would increase. Also, for the convenience store industry, location and brand image are very important factors that can attract customers. So, the entry barriers to the industry are moderate to high and thus the threat of new entrants is low. 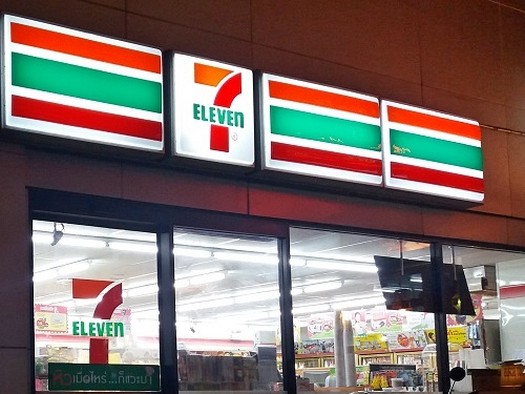 Below are the threats of substitute products of Porter’s Five Forces analysis of 7-Eleven:

There are many substitutes for the industry in which 7-eleven operates.

The customers can choose to purchase their food and beverages from local bakeries and diners as well. Further, with giants like Amazon and Walmart investing highly in omni-channel retail experiences and 10-minute grocery delivery businesses coming up, the availability of substitutes is high. Also, the products offered by 7-eleven and similar convenience stores are not highly differentiated. The customers do not incur any major switching costs in adopting the products of a substitute. This is an important factor because, as mentioned, the primary target groups of the industry are individuals with low- and medium-income levels. Hence, the threat of substitutes is a weak force as per the Porter’s five forces model.

In the 7-Eleven Porter Five Forces Analysis the bargaining power of the customers can be explained as:

The volume of customers for the convenience retail stores is high. The sales made per customer is extremely small as compared to the total revenue of the company. This is because of the large scale of operation and the multiple regions it operates. This low concentration of customers lowers their bargaining power.

However, there are several other factors that works in the favor of the customers. As already mentioned, there are several possible substitutes for the market, the most common of them being online delivery services. The product offerings are not differentiated largely and hence customers can switch easily. Further, there are no switching costs involved for the same. The target customer segments are low income and middle-income groups. These groups are largely price sensitive and less brand loyal. This means that they would prefer to switch to a competitor as soon as prices rise without incurring any costs.

Overall, the bargaining power of customers is moderate to high in the industry.

Following is the bargaining power of suppliers in the Porter’s Five Forces analysis of 7-Eleven:

There are a large number of suppliers for the convenience retail industry. The suppliers do not supply any exclusive or undifferentiated products. The buyers for these products can switch easily because of the standardized nature of the products. Due to these factors, the suppliers are not in a position to control the prices and thus, they have low bargaining power. Since 7-eleven operates on a large scale, they have greater say in how the products are prized, since they do not incur any switching costs in an industry with low concentration of suppliers. Further, the suppliers do not pose a problem of forward integration i.e. selling their products directly to the consumers. Hence, the bargaining power of suppliers is a strong force in the industry.

The impact of key competitors in the 7-Eleven Porter Five Forces Analysis is as follows:

The convenience store industry has many players worldwide, most of them being regional stores with limited operations. Some of the major competitors of 7-eleven are Murphy USA, Walmart, Wawa, Spar etc. The total market is roughly 4900 billion USD. The projected CAGR is around 8.5% which means it is moderately growing industry. Because of the large number of players, there is intense competition for market share.

Further, since there are major capital requirements for setting up and growing in this industry, there are considerable exit barriers in infrastructure and credit settlements. As a result, the competitive rivalry is high. Many of the key players follow cost leadership strategy, which further increases the price competition and rivalry. The customers have a lot of substitutes available at their disposal and can easily switch due to high price sensitivity.

So overall, in the convenience retail market, the competitive rivalry is a strong force as per the Porter’s five forces model.

To conclude, the above 7-Eleven Porter Five Forces Analysis highlights the various elements which impact its competitive environment. This understanding helps to evaluate the various external business factors for any company.