The threat of new entrants in the Bank of America Porter Five Forces Analysis can be explained as follows:

New entrants to the financial industry are the new players, such as startups that enter the industry or other established companies venturing into the financial industry through brand extension. This threat in the financial industry in which Bank of America operates is relatively small. Bank of America operates at a huge scale, and it is not easy for a new entrant to venture into the industry and establish itself where huge players such as JPMorgan, Bank of America, etc., play in and achieve the scale. The new entrant will require high initial capital, which is a significant barrier to entry, post which it will have to earn the brand equity that the existing players own. This being a finance industry, there is a huge number of regulations put in place to avoid frauds and crises, and the new entrant will have to comply with them as well differentiate themselves at the same time. Considering all these factors mentioned above, we can conclude that the threat of new entrants is low. 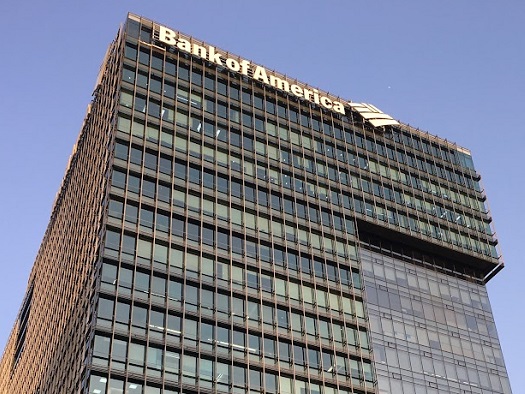 Below are the threats of substitute products of Porter’s Five Forces analysis of Bank of America:

A substitute can be defined as any product or service that have the potential to compete and replace Bank of America's products.

It provides investment banking and financial services. There is always a growing threat from the players such as PayPal, which offer similar services. The fintech industry is on the rise, and they are provided similar services in a specialized manner with a special focus on customer-centricity and experience and continue to innovate using technology. In addition to these, there is certain Peer to peer lending services as well. There are multiple other companies with specialized services to customers, which used to be a cup of tea of banks only. These might prove to be potential substitutes to Bank of America's services individually. Hence, we can say that the threat of substitutes is high in this case.

In the Bank of America Porter Five Forces Analysis the bargaining power of the customers can be explained as:

Customers are the entities that avail the services of Bank of America. They can be categorized as two, individual customers and organizations. The individual customers do not display cohesive behavior, and the individual transaction quantities are low. The opposite is the case with large entities with higher transaction quantities. This disparity in the bargaining power is because of the individual opportunity cost to the firm. For instance, if a customer closes their bank account, it will not make much difference which is not the case with losing a large group of customers or organizations. The second case is of individuals that are either corporates or high net worth individuals with higher transaction amounts.

Hence, in this case, we can say that the bargaining power of customers is low to moderate.

Following is the bargaining power of suppliers in the Porter’s Five Forces analysis of Bank of America:

Suppliers to a financial industry firm are different for a firm operating in the fast-moving consumer goods industry (FMCG). In this case, the suppliers are considered to be the depositors and the human resources, which are the employees of the firm like Bank of America. Depositors invest their money into the firm and are the source of capital for the firm. Similar to the case of customers, there are again two types of investors, individual and corporate/High net worth individuals. As expected, the bargaining power of the individual investors is minimal, but there is considerable bargaining power of corporates and high net worth individuals, similar to the case of customers. As for the employees, they do not have specific bargaining power themselves, but there is a chance of forming trade unions and collective bargaining, in which case, the bargaining power can be considered. There is also a chance of them leaving the firm, which will be a considerable force if done in bulk. With all the above-mentioned factors into consideration, we can say that the bargaining power of suppliers is low to moderate.

The impact of key competitors in the Bank of America Porter Five Forces Analysis is as follows:

There are multiple firms operating in the financial industry, and they have a value proposition similar to the case of Bank of America. Some of these competitors are JP Morgan Chase, Goldman Sachs, HSBC, Standard Chartered, etc. It must also be noted that, even though Bank of America is based out of the USA, it also operates in 30+ other countries and revenues from those countries are also considerable and important. In the international market, Bank of America faces competition from not only the global firms based out of America but there is also a considerable presence from banks based out of other countries such as the Deutsch bank based out of Germany. There is also considered high competition from domestic firms. The switching costs being considerably low just worsens the competition. In addition, there are rising substitutes, as mentioned earlier, that offer specialized services.

Considering the factors mentioned, we can say that the competitive rivalry is high.

To conclude, the above Bank of America Porter Five Forces Analysis highlights the various elements which impact its competitive environment. This understanding helps to evaluate the various external business factors for any company.