The threat of new entrants in the Hamleys Porter Five Forces Analysis can be explained as follows:

Hamleys is a key premium toy retailer in the world. The company was acquired by Reliance Industries in 2019. The key factor in determining the threat of new entrants is the entry barrier that the industry poses. Incumbent players can achieve lower costs due to mass-production and standardization of process. In this manner, the economies of scale works in the favour of the incumbents. Also, the capital requirements are variable. Smaller players can enter the market with limited upfront capital investments and capture market share. However, if they start on a large scale with multiple stores and decent distribution channels, there will be a large capital requirement for marketing the company to be comparable to Hamleys brand standards. However, it would take a long time for new entrants to establish the brand-name and supplier relationships that the incumbents like Hamleys enjoy. The customers incur no switching costs in switching to the products of a competitor. It can be concluded from the above factors that the entry barriers are low for the new players. Overall, the threat of new entrants is a moderate to strong force in the toy industry. 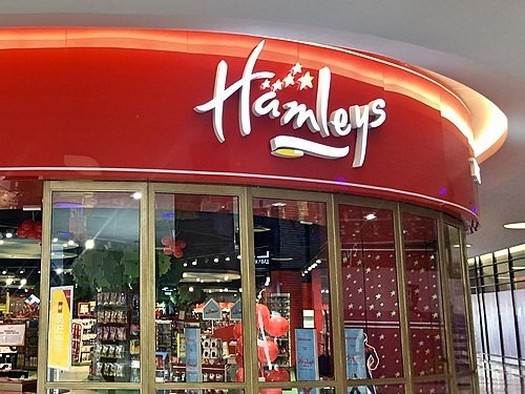 Below are the threats of substitute products of Porter’s Five Forces analysis of Hamleys:

There are many substitutes available for the toy industry.

The target market of Hamleys is young children to late teens with parents in the upper income groups. To begin with, more children are gravitating towards mobile and PC games from a very young age. With the immense growth in technology, children have started to adopt gaming apps, Xbox etc as a source of entertainment. Further, Tv shows made for children like cartoons and movies are also a major substitute for toys. So largely, the availability of substitutes is very high for the toy industry. Additionally, the customers face no switching costs if they adopt the products of a substitute. In fact, being a premium-priced retailer, switching to free mobile apps saves the customers a lot of extra expenses. So overall, it can be concluded that the threat of substitutes is a strong force for the toy industry.

In the Hamleys Porter Five Forces Analysis the bargaining power of the customers can be explained as:

The toy industry enjoys a high volume of customers with an average spending that is a small portion of the overall sales of the company. So, the size of purchase is does not attribute a high bargaining power to the customers. Further, the buyers can not forward integrate. They can not produce the offerings of the industry by themselves, which further lowers their bargaining power. Additionally, a company like Hamleys usually targets upper-middle- and high-income households. This means that they are not very price-sensitive and the quality of purchase matters to them more. However, there are multiple other factors that works in favor of the customers. The customers do not face any switching costs. Further, there are a number of substitutes available to replace expensive toys for their children. The target consumers i.e. young children and teenagers are themselves getting more fascinated towards online games. These factors add to a lot of bargaining power to the customers.

Overall, the bargaining power of customers is a strong force in the toys industry.

Following is the bargaining power of suppliers in the Porter’s Five Forces analysis of Hamleys:

Hamleys retails the toys from multiple well-known brands. The brands include Marvel, Nerf, Lego, Barbie, Hotwheels, Fisher Price etc. All these brands are well-established and have gained huge popularity among the buyers over the years. As a result, the suppliers are in a position of negotiation to a great extent and can dictate their asking price. Further, the number of suppliers is very limited. The reason is that Hamleys targets customers largely of the premium segment and cannot compromise on the quality of the products in the stores. Being a retailer, the customers are drawn to the brands offered by Hamleys. Further, the suppliers can also forward integrate. This means that they can use alternative distribution channels to sell their offerings. They can setup their own websites and also use e-commerce platforms like Amazon. They can also shift to alternate sellers without incurring additional expense. Overall, the bargaining power of suppliers is a strong force in the toy industry.

The impact of key competitors in the Hamleys Porter Five Forces Analysis is as follows:

The toy industry size is around $95 billion USD worldwide and is expected to grow at a steady pace. The slow growth rate can be attributed to extensive competition from substitutes like mobile and PC gaming apps and kid’s movies and TV shows. As a result, the market is saturated and there is intense competition among the incumbents to gain market share by focussing on market penetration as the major growth strategy. Some of the major direct competitors of Hamleys are FAO Schwarz, Letterbox Toys, Mastermind toys etc, however Hamleys is still the leading retailer. Usually in this segment, price competition is high. However, since the company targets upper-end customers, the price sensitivity is relatively less. The industry does not pose major exit barriers and it is relatively easier for less profitable players to exit the market than to stay put and hamper the profitability of the key players.

Overall, the competitive rivalry is a moderate to strong force in this industry.

To conclude, the above Hamleys Porter Five Forces Analysis highlights the various elements which impact its competitive environment. This understanding helps to evaluate the various external business factors for any company.